Commotion of the Birds: New Poems 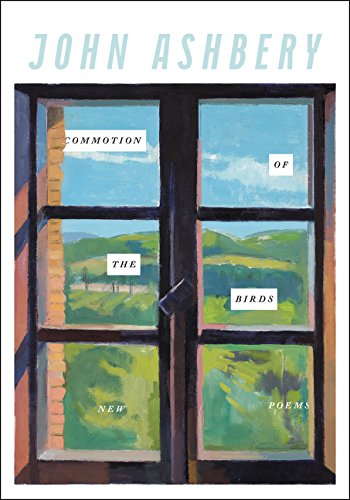 “Images coagulate and dissolve in a kaleidoscope of language.”

The recent passing of John Ashbery silenced one of contemporary poetry’s unique voices. Ashbery gained nationwide critical recognition in 1975 with his award-winning Self-Portrait in a Convex Mirror. It won an awards trifecta when Self-Portrait won the Pulitzer Prize, the National Book Award, and the National Book Critics Circle Award. In 2016 Ecco released his last book of poetry, Commotion of the Birds.

At first blush his poetry can seem confounding and needlessly opaque. The poem “Strangers May Kiss” opens with these lines:

It wouldn’t be the first time (either),
curvaceous, some of the art work
keeps spilling, and so on.

What is that supposed to mean? Ashbery had connections with avant-garde poets like Kenneth Koch and Frank O’Hara. He also had a professional background in advertising and art criticism. Yet these biographical facets don’t immediately lead to any concrete revelations in the poetry. Perhaps it is the presumption for some that a poem has to mean something.

In this final collection of poems, Ashbery uncouples language from meaning. But it isn’t all opaque nonsense. Take, for example, “Whatever the old man does is always right.”

First of all, you weren’t telling me the whole story.
Friday saw armpit futures rise across the country.
It is an acknowledged truth that you and your little brother
sidled across the city of two million souls.
Well, and were we supposed to forget it?
That’s not the way the soul functions in today’s suburbia.
We’ll have no more of that, nor go a-roving.

Ashbery takes stock phrases, plundered from Wall Street to Jane Austen, then tweaks them slightly. The end product is verbal absurdity.  He can also be mocking. “Evening and Elsewhere” begins:

Say not the struggle naught availeth.
Soon you’ll be out of here,
but hey you know what?
Freedom is a pin in the ass.

Despite the awards and accolades, Ashbery isn’t above using a pun. Like Thomas Pynchon, he toggles between highbrow and lowbrow. Throughout the collection, the poems dance between three poles (language, meaning, form). Sense will turn into nonsense, a highly formal poem will use silly words, and he’ll turn a phrase merely for the sound of the words. Poetry remains a spoken medium, and Ashbery exploits it brilliantly.

Ashbery’s work isn’t for everyone. It is an acquired taste. For every laudatory exclamation there will be the inevitable detractors. To some these poems will come across as nothing more pretentious gibberish. To others Ashbery’s reluctance to pen didactic politically engaged poems will seem like a betrayal of whatever partisan ideals the thinkpiece writer is selling.

Commotion of the Birds attacks the modern world sideways, playing with language like a cat with a dead mouse. “Why can’t everything stay the way / it used to be, O biggest hipster, dolor?” A question for the ages. “It wasn’t his brown sugar corsage.”

Images coagulate and dissolve in a kaleidoscope of language. Others have classified Ashbery’s work as Surrealist, but Commotion of the Birds reflects another influence, earlier than Dali and Breton. This collection reveals John Ashbery as America’s Stéphane Mallarmé.