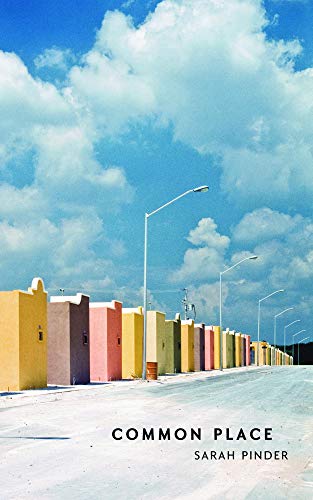 “Sarah Pinder turns the mundane into the poetic sublime.”

Spare and evocative, Common Place by Sarah Pinder is a poem about “shifting, resilient bodies bound by systems of capital and power.” Or so the back cover blurb describes, albeit in a terms rather grandiose and abstract. Coach House Books, the Toronto-based publisher focused on Canadian authors, published Common Place.

Lacking sectional titles, the fragments build toward an elusive whole. Living in Toronto, Ms. Pinder's previous work was Cutting Room. The poem itself reveals a poet who has cut text down to the bone. Despite the leanness, it would be misleading to call Common Place minimalist. Miniaturist might be a better appellation, since Pinder's work contains small portraits of the everyday. The concision and razor-sharp imagery bespeak a poet in top form.

Pinder begins Common Place with descriptions of a gravestone, a man holding a baby, and a video call.

“Digging the trough for a headstone,

Almost halfway through there is this:

“Make it froth and try—

The shard of words bespeaks a physiological reality, a body reduced to parts (“tongue”) and actions (“smacked,” “swallowing”). The subject remains ambiguous. What is the “it” being referred to? The section before this tells of someone at a river with a baby “who wants to kiss the smooth stones” and “to kiss each leaf.” There may be a connection between the two sections, but Pinder doesn't resort to hand holding or making the connection explicit. The implicit meanings and connections between the various sections build into a cohesive whole. The cohesion underscores an independent logic unique to the poem itself, albeit a kind of waking dream logic. While it may sound contradictory, Common Place possesses a dream logic located in the sharp-edged realities of the immediate present.

Common Place also explores the concrete of urban spaces. The text reflects the everyday challenges of how crowds and capital threaten to crush and alienate everyone into anonymous oblivion. The poem humanizes what would otherwise be buried in an institutional white paper or reduced to a heap of anemic statistics.

“We looked for tooth marks

on the Plexiglass sound wall,”

“Does remembrance mean anything to you?

What resolution have you made and broken?

The tension between human vulnerability and the anonymity of urban spaces seems reminiscent of J. G. Ballard. The result is a kind of anti-bucolic, an extended elegy for what is lost. “You knew how to pick quartz / and had forgotten:” and immediately followed by:

“Today, a week before the equinox,

and you are a tissue-paper dandelion,

the first golden herald of spring.”

The poem explores these everyday struggles, recalling William Blake's famous lines “To see a world in a grain of sand / and a heaven in a wild flower.” How does humanity regain its innocence amid the tsunamis of awfulness smashing against it each and every day? How does humanity find the good surrounded by “Windowless concrete promises / with sno-cone facades”?

“I'll come back to the marble

atrium pluralities, but not now—

it's time for devotion's seed pod

Common Place is a poem searching for “What comes after longing?” and the anonymous forces pushed down on the vulnerable. It is an elegy written in fragments, congealing into small-scale narratives and then, just as quickly, dissolving into nothingness. While this may paint the poem as a bleak exercise in poetic miserablism, it is also about the compulsion to treasure those small, ineffable, moments. “I have no coins, I have no messages / but your last about thinning little lettuces.”

Sarah Pinder turns the mundane into the poetic sublime.