Command: The Politics of Military Operations from Korea to Ukraine 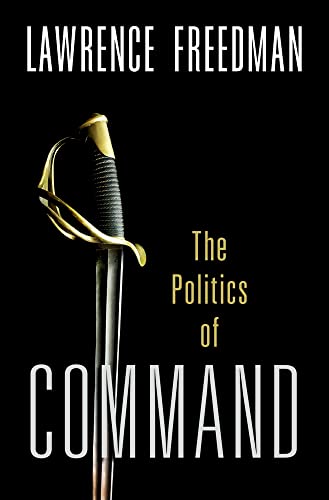 “Any student of military history will find this an invaluable book on the challenges of higher command and grand strategy. It is another masterful work by one of the best practitioners of strategic thought today.”

The famous quote by Clausewitz that “war is not merely a political act but a real political instrument, a continuation of political intercourse, a carrying out of the same by other means,” has certainly been true since the end of World War II. In this outstanding new volume Lawrence Freedman, one of the pre-eminent historians and strategists of our time, examines the relationship between political and military leadership in post-World War II wartime via a series of case studies.

These case studies cover a variety of scenarios, exploring the relationship between civilian and military control of strategic and operational goals, the need to align political ends with military ways and means, and the challenges of setting and achieving geo-political goals through the use of military power. The book covers both conventional and unconventional conflicts, as well as scenarios such as the Cuban Missile Crisis and so-called peace-keeping operations like the Kosovo Conflict of 1999.

There are several common themes that run through these scenarios. In Western democracies in particular, the relationship between military and civilian leaders in wartime can be very contentious, to the point that it can adversely affect military operations. The most extreme situation, the crisis of command between General Douglas MacArthur and President Harry Truman in Korea, led to the relief of General MacArthur when he crossed the line between political and military decision making and threatened to turn Korea into a wider global Cold War conflict. It also became an issue in the 1972 Vietnam Easter Offensive discussed by Freedman, when the political priorities of President Nixon to bring the North Vietnamese back to the negotiating table by escalating the scope and scale of air attacks on North Vietnam conflicted with the military advice and priorities of his theater commanders.

The most extreme example of the misapplication of civil-military authority is when the political strongman becomes the commander-in-chief and merges the political and military command of war. Saddam Hussein’s Iraq was the archetypal case study for what can go wrong when a politician gets delusions of military grandeur. Saddam’s disastrous war with Iran was only topped by his debacle in Kuwait in 1990–1991 when his military ineptitude nearly led his army to disaster, which was only prevented by the decision of the first President Bush to not pursue regime change.

However, politics can be a potent brew with military command in other situations as well.  The well-done case study on the crumbling of French Army morale after the failed attempts to retain Indo-China and Algeria in the French Empire in the 1950s led to a partial mutiny of some French senior officers and troops, showing the deleterious effect of a harsh and failed counter-insurgency campaigns on the discipline and morale of an army.

There are other themes that Freedman explores as well. Unity of command and ensuring that military operations support political objectives are two crucial aspects of successful military-civilian relationships and command. The British campaign to retake the Falkland Islands was an excellent example of how the tyranny of distance, even in the 20th century, impacted the command structure and combat effectiveness of the British Task Force and its components commanders.

Slow communications in the era before the internet and significant satellite communications meant that the various land and sea commanders often had to improvise command and control in the face of a persistent Argentine air and naval threat to execute one of the most challenging amphibious landings of the modern era. The American invasion of Afghanistan, the Iraqi Surge, and the recent operations against ISIS also fall under Freedman’s sharp observation.

The volume concludes with observations about the future of command in combat, the continued but still neglected need to ensure political objectives are matched with military plans and capabilities, and the changes that instantaneous communications and compressed decision-making times in a high ops tempo environment may have on the future of military and civilian command.

Any student of military history will find this an invaluable book on the challenges of higher command and grand strategy. It is another masterful work by one of the best practitioners of strategic thought today.