Command Culture: Officer Education in the U.S. Army and the German Armed Forces, 1901-1940, and the Consequences for World War II 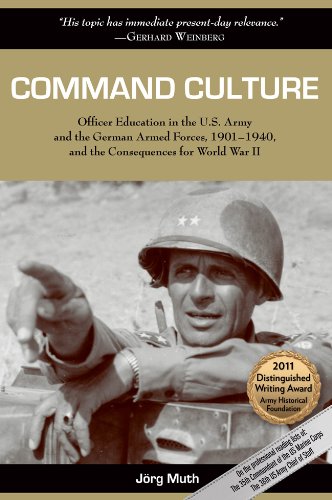 “Command Culture is a significant work, providing an important new perspective on the ‘performance controversy.’ Anyone with an interest in that controversy will benefit from reading it.”

Jörg Muth obtained his doctorate in military history at the University of Utah. In addition to Command Culture, Mr. Muth is the author of a study (in German) of desertion in the Prussian Army during the era of Frederick the Great, as well as articles on German military history during the 20th century.

Author Muth is, or soon will be, a member of that small group of historians whose first major contribution to the field is regarded as a very significant one. Command Culture is an important book in that it confronts a controversial and emotionally charged issue in military history, and does so on the basis of solid research, and without hyperbole.

Perhaps the most volatile question in the field of military history today concerns the relative performance of the United States and German armies in the Second World War. The controversy surrounding this matter has swirled about since at least 1994, with the publication of the late Keith Bonn’s When the Odds Were Even, drawing into its vortex both professional historians and so-called “history buffs.”

At the crux of this “performance controversy” is the deceptively simple question of whether the United States or the German army outperformed its opponent during the Second World War, and if so, to what source or sources this phenomenon might be traced.

For those unfortunates (or “fortunates,” depending upon one’s point of view) heretofore unfamiliar with this dispute, it is perhaps necessary to point out its most important subtext. It is that no one taking part in this dialogue, no matter the nature and relevance of his background, or the meticulous character of her research, may make a statement or reach a conclusion tending to support the German “side” of the discussion, without being branded “pro-German,” thereby consigning the fruits of her or his research to the dustbin of historical inquiry.

It is, of course, the case that the opposite situation—being branded “pro-American” and thus forfeiting any right to have one’s point of view taken seriously—is not applicable here. So great is the Germanophobia present in these circumstances that an unwitting and untraveled Martian, remaining on his home planet and having access to and considering all of the relevant facts, and thereafter delivering an opinion perceived to be “favorable” to the German “side,” would be branded “pro-German” notwithstanding the fact that he had never set foot on Earth or met an Earthling.

Command Culture is well balanced, simple, and direct. It includes an introduction in which the author considers the early connections between the German and United States armies in the wake of Prussia’s successful wars of German unification (against Denmark in 1864, Austria in 1866, and France in 1870), when the Prussian general staff system, and the training that prepared young men to shoulder its burdens, appeared to the Americans to be the best models to follow in order to create a successful military system for the United States.

Just as there may be a slip ’twixt cup and lip, here there was a “slip” between reality as perceived by the leaders of the U.S. Army and the actual Great German General Staff and related system for training officers. Mr. Muth contends that beginning with the retirement of Helmuth Karl Bernhard Graf von Moltke (“Moltke the Elder”) in 1888 the institution of the general staff began a pattern of decay that ended in 1945 with the collapse of the Third Reich.

The problem lies with the fact that the genius of the general staff was dependent upon the brilliance of its chief, in this instance the departed Moltke. For the next 50 years there would be no chief who could measure up to the standard established by Moltke the Elder, with the result that the general staff became a cipher, and in the Nazi time (when in fact it existed in name only), little more than a rubber stamp and a means for making the army complicit in the crimes of the regime.

But there was a greater error on the part of the men who led the U.S. Army and educated its young officers: These men failed to understand that the education of young officers should be broader in its curriculum than the engineering courses that traditionally had formed the core of cadet studies at West Point. Further, they failed to appreciate that the capricious and often brutal tradition of hazing was nothing more than a waste of time, doing little in the way of either bonding the cadets to each other, or making them “tough.”

The most important area in which the U.S. Army has failed, contends the author, is that of leadership. Leadership, from the German point of view, has always meant leading from the front. In the author’s view, this is an attribute that the U.S. Army has never tried to inculcate in its officers, a tradition that continues right down to the present.

What does “leading from the front” mean? It means actually fighting with your men, exposing yourself to enemy fire, risking your own life and limb in the same way that your privates, corporals and sergeants do.

One way to gauge how well an army’s officers are leading from the front is to look at (in this case) respective lists of German and American general officers who were killed or died while in action against the enemy during the Second World War. By my admittedly unscientific review of this information, five American generals were killed or died while engaged with the enemy; the number of German general officers who suffered the same fate is one hundred and five.

Command Culture posits that the tactical exploits of the German Army, in both attack and defense, demonstrate its ascendancy among all fighting forces in the Second World War. In the author’s view, it was that army’s tradition of leading from the front---the willingness of its officer candidates to “learn how to die”—which explains that army’s tactical proficiency.

Command Culture is a significant work, providing an important new perspective on the “performance controversy.” Anyone with an interest in that controversy will benefit from reading it.