The Coming of the Nixon Court: The 1972 Term and the Transformation of Constitutional Law 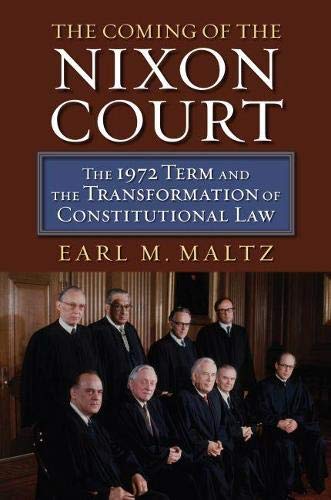 The common perception of the Supreme Court as a conservative body remains a truism, if not a banal cliche. Unlike the two other branches of the United States government, the Supreme Court is held above petty politics and partisan slap-fights. By far the smallest of the three branches with nine members, a justice can only be replaced by retirement, death, or impeachment.

After the alleged excesses of the Warren Court, the candidate Richard Nixon swore to change the Supreme Court to become more aligned with a resurgent American conservatism.

The Coming of the Nixon Court: The 1972 Term and the Transformation of Constitutional Law by Earl M. Maltz investigates the gradual metamorphosis from liberal court to conservative court. He does this through a series of chapters focusing on various topics including school desegregation, obscenity, equal protection, sex discrimination, and abortion. Maltz, a Rutgers University law professor and prolific author, provides a highly concentrated legal analysis in a short and challenging book.

The emergence of the so-called Nixon Court occurred through the combination of an election, a retirement, and a scandal. America experienced these three events in short order, beginning with Chief Justice Earl Warren announcing his retirement in 1969.

Not wanting Nixon to appoint a Chief Justice, President Lyndon Johnson attempted to nominate Justice Abe Fortas to the position. The Fortas nomination fizzled out in a scandal, forcing Fortas to leave office in disgrace. The tumultuous election year culminated in Richard Nixon becoming president with two Supreme Court seats ripe for occupation by a conservative. The challenge with the Supreme Court is that the highest court does not operate like other political bodies. Nominating a Supreme Court justice is no mere act of patronage. Once confirmed, justices retain their position for life.

In the opening chapters, Maltz profiles the nine justices of the 1972 term. These include four men appointed by Nixon: Warren Burger in 1969, Harry Blackmun in 1970, Lewis Powell, Jr., and William Rehnquist, both in 1972. Maltz explains “[B]eginning in 1972 the Court included justices whose viewpoints spanned virtually the entire spectrum of US politics, with three justices who were committed progressives, two justices who were equally committed conservatives, and four justices whose political perspectives were less easily described. The decisions rendered by the Court as a whole were the by-product of coalitions among these different groups.”

It is a statement at once banal and profound. Despite the members of the Court task of constitutional interpretation, contemplating the intellectual, historical, and moral factors of the case, in the end, when five justices agree a case can be settled. The work of the Supreme Court is both confounding in its abstraction and partisan in its practicality. Like the Congress fashioning a bill, the Court relies on coalitions and compromise to operate.

Maltz explores important cases in each chapter. He charts the genealogy of a particular topic up to the 1972 term. For school desegregation, the seventies offered new challenges and attitudes subtly different than the fifties and sixties. The Court faced the issue of how best to handle de facto segregation. Unlike the de jure cases set in the Jim Crow South, the de facto cases occurred in places like Denver and Detroit.

“Powell felt strongly that white Southerners were being unfairly singled out for criticism by hypocritical residents of the North, where segregation might not have been mandated by law but where society was in fact hardly less divided on the basis of race than that of the South itself.”

The Coming of the Nixon Court works best as a sort of advanced studies to The Brethren, by Bob Woodward and Scott Armstrong. Maltz freely uses terminology and explanations that bespeak its academic press origins. The survey of the 1972 could be seen as a watershed, ushering in a more conservative judiciary. But unlike the other branches, this transition to a predominantly conservative ideology came in incremental installments and only through precarious coalitions.

The Court in 1972 saw the eclipse of William O. Douglas, appointed by President Franklin Delano Roosevelt, who would retire in 1975. It also saw the nomination of conservative ideologue William Rehnquist, who would be elevated to Chief Justice in 1986 by President Ronald Reagan.

During that year, Douglas and Rehnquist would joust, since each operated as ideological outlier in the constantly shifting alliances of Supreme Court maneuvers. Maltz chars how the Burger Court was less a traditionally conservative court than a centrist one. Through his rigorous investigation of court cases, he seeks to define the amorphous boundaries associated with political centrism.