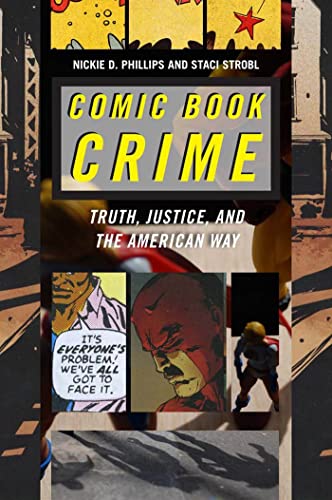 “A masterful study of the painful reality of life . . .”

The crime that occurs inside a comic book may bear a close similarity to what we see on the TV news, outside our door or in the town next door. But there is a crucial difference between what we experience in real life and the vicarious thrills found in issues of The Amazing Spider-Man or Detective Comics.

That difference between the reality of crime and the way it is portrayed in the fictional universe of comic books is at the center of Comic Book Crime: Truth, Justice, and the American Way.

This fictional world of four colors has been in existence for over 75 years. From its beginning in the mid-thirties, comic books and the stories they told quickly built up their own code of morals and behavioral standards.

But the world of today is vastly different from the world where the Trylon and Perisphere once rose over the 1939 New York World's Fair. In 2013 crime is right in front of us almost every minute of the day.

Authors Nickie D. Phillips and Staci Strobl outline these distinctions with clear thinking, rational logic and an understanding that even though comics are a world of fiction, they still reflect something important about us as a society.

Their topic is accessible to both the fan and those who may not understand the world of comic books. Interviews with such luminaries as Scott McCloud and Art Spiegelman who help provide a basic framework for those unfamiliar with the world of comics.

In the first few chapters they also look at crime found at the start of the medium. The early villains were more often than not straight criminals, thieves, pickpockets, murders. These were crimes that the average reader could comprehend. There was no attempt to rationalize or explain the reasons for crime. It happened; heroes and detectives appeared and someone went to jail.

They also remind us that in the early days of Superman the Man of Steel dealt more with social injustice and street crime. It was only when WWII begins to accelerate in the public consciousness that villains shifted from the street and familiar into the political. From the basic foundation of the medium they quickly move into the present.

Using information and opinions gathered across on-line forums, at comic books stores and in comic book conventions, the authors concentrate their remaining research on the way that comics have shifted in tone since the events of 9/11. Using over two hundred titles that have appeared since that tragedy as a base for their findings, their research allows a detailed look at the way comics have changed. Captain America saw a surge in sales after 9/11 and the authors look for reasons.

Comics now feature different, more realistic-based crimes that often have much larger consequences. There is also a shift in the way Muslims and Arabs are portrayed.

The majority of the titles referenced are superhero-based. But independent and political books such as Joe Sacco’s Palestine or The Life and Times of Savior 28 by J. M DeMatteis and Mike Cavallaro also figure into the equation.

The way that justice is met out to criminals is dissected. In comic books crime is often dealt with in terms of retribution, often including vengeance for the act committed. In real life we tend to move towards rehabilitation.

Part of the way justice is delivered depends on the hero. Superman holds a high moral stance when he deals with a criminal. But Wolverine or The Punisher have a much different agenda. They are part of a recent wave of heroes that make decision on their own, outside the usual confines of legality.

Motivation behind criminal actions is an important part of the way we look at comic villains. In the Joker’s case he is considered insane. But what caused this shift in his mindset? This can lead to a Freudian look at a villain’s childhood or life events. Some criminals operate from a logic based, researched and emotionally detached base. Motivation is important on both the heroic end and the villain’s as well.

In terms of justice the authors return to the DC storyline Identity Crisis (and its follow-up Final Crisis). One of the most controversial and brutal stories ever seen in comics the villain rapes an innocent and figures as Batman, Green Arrow, and others confront their own hypocrisy or responsibility in their reactions across time.

The outcome itself is pure justice. But it is ultimately unsettling as we are left with more questions about crime and its root cause as well as the mental health and judgment skills of those who fight crime.

Complicated story lines such as Crisis or Marvel’s Civil War are broken down and made easily accessible for everyone. No idea is left untouched in this brutally honest assessment of the comic universe.

The concept of women having to be rescued by men is a key component of the look at gender and sexuality in comics as is the decades-long absence of a gay presence.

When it comes to race and the way it is handled inside comic books you can’t get much more direct than calling one of your chapters “Aren’t There Any Brown People in This World?”

Published as part of the Alternative Criminology Series by New York University Press, Crime in Comics ably serves both the Police Chief looking to learn more about the world of comics and the fan who wants to broaden the way they perceive their fictional universe.

A masterful study of the painful reality of life, the behavior of those we can never begin to understand and the way our fiction, myths, and heroes reflect back on us and our world.