The Comedians: Drunks, Thieves, Scoundrels, and the History of American Comedy 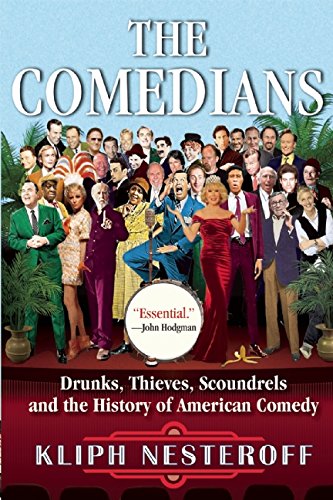 A standup comic, according to Kliph Nesteroff’s interviewee Dick Curtis, was given its name by the mafia. A standup fighter could stay on his feet and remain standing under the physical abuse he was receiving in the boxing ring—most boxers were owned by the mafia in the 1920s and 30s—and the comedian who went on stage and took the abuse from hecklers and continued to do his routine was a standup comic. This is just one of the many unearthed historical gems Nesteroff unleashes on readers in his brilliant tome.

Former standup comedian and host of Classic Showbiz Talk Show, Nesteroff takes a look at the history of comedy, starting at vaudeville and taking readers to the 140-character one-liners on Twitter. Comedy is an art form of its time, something most people intrinsically know—our parents’ humor often isn’t our own and Shakespeare’s jokes in Taming of the Shrew are hardly as scandalous to a crowd of teenagers in an English literature class as they were to a standing crowd in the Globe Theatre centuries ago. The style of comedy and its changes over the decades is also examined as well as its locales (from the stage to specially built comedy clubs to movies just to highlight a specific comedian to talk shows).

Nesteroff examines the myth of the comedian who uses humor to hide his insecurities as well as the legacies of forgotten comedians—does Harry Einstein or Shecky Greene ring any bells? If not, the names will after just the first few chapters.

Nesteroff is brilliant in bringing the polish and shine back to old routines and examining their humor and genius—what made the skits and their originators so innovative for their time. And like in the sciences in which there is a scholarly tree of who has studied under whom, so there is for comedy—or who has been influenced by whom, even when and where—which Nesteroff illuminates, bringing together this funny family.

The book is a serious study, but it is also clever and amusing, filled with anecdotes and famous (and infamous) names. Compiled into this book are Nesteroff’s own interviews with other comedians as well as from other resources. However, as good as this book is, and as necessary as it is for any class or scholarly study of comedy, there are some serious problems. Barely acknowledged are the challenges of gender, race, and ethnicity in this fascinating read. Black comedians are given short shrift: for instance, Eddie Murphy is barely given a full page (oh, the irony, given that Nesteroff praises Murphy for being the greatest comedian of the 1980s), and Wanda Sykes is completely missing. Meanwhile Margaret Cho doesn’t show up at all, neither does Tina Fey, Sarah Silverman, or Gilda Radner. The loss of female and black voices in an exploration of comedy is rather an ironic yet unfortunately accurate (likely unintentional, and, for that, all the more hurtful in some respects) statement of their marginalization, which also raises the question—besides Ellen DeGeneres, where are all the rest of the gay non cis-gender or non-heteronormative comedians in this book?

The Comedians is off to a great start, but it needs a companion follow up that examines the unique problems everyone who isn’t white or male has in breaking into this industry.