Come Fly With Me: An Alaskan Nights Novel 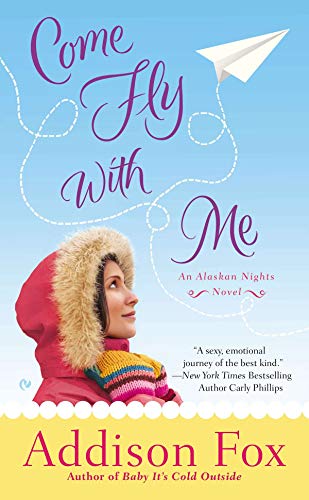 “Come Fly With Me invites the reader to take an airborne journey with an engaging pair of lovers to discover the beauties of the Alaskan frontier.”

Come Fly with Me is a pleasant contemporary romance enhanced by an unusual setting: the fictional small town of Indigo, Alaska. Not many romance novels are set in the 49th state, so Ms. Fox’s newest book brings a little something out of the ordinary to the reader. It is the second in the Alaskan Nights series, which began with Baby, It’s Cold Outside.

Grier Thompson was raised by a single mother among the blue blood society of New York City. (Her best friend’s name is Sloan, which helps clue in the reader.) When the Alaskan pipeline-worker father she never knew leaves her half of his estate, Grier jets off to Indigo to explore her Alaskan heritage, discovering a half-sister she didn’t know existed.

Not surprisingly, her new relative is less than pleased to be splitting her inheritance with a half-sibling who was not part of their father’s life in any way, so she contests the will. This forces Grier to remain in Indigo until the case is resolved.

The town of Indigo slowly warms to Grier, especially after one of its favorite sons, Mick O’Shaughnessy, takes an interest in her. Mick is a bush pilot, providing the transportation link so critical to the isolated communities of the giant state. He’s also the grandson of one of Indigo’s matchmaking grannies, the three of whom decide Grier and Mick are a match made in heaven. Once the grannies take a hand Grier and Mick might as well resign themselves to their fate.

Grier, however, struggles with the prejudices her mother has gifted to her and an unhappy chain of recent events. Her mother felt her father wasn’t of high enough social standing to marry, which is why Grier never met him. On top of that, Grier has just broken off her engagement to a well-connected rising star in the financial world, resulting in the loss of her job. Her ex-fiancé cheated on her, but that doesn’t seem to have carried any weight since his father runs the firm where Grier worked.

Grier used to be on the partner track, and now the only job offer she has is a low-level accounting position. She feels as though she’s failed in all the ways her New York world measures achievement, and she’s reluctant to admit defeat.

On the other hand, Mick is a potent antidote to her sense of failure. Rugged, blue-eyed and “lovable,” as Sloan describes Alaskan men, Mick refuses to allow Grier to push him away. They spent one passionate night together before the book opens, and he is determined to reprise the experience. Grier has a complicated mix of feelings about his persistence and succeeds in holding him at arm’s length for most of the book.

While clearly Grier has much emotional baggage to deal with when it comes to her mother, father, and half-sister, her refusal to consider a relationship with Mick is somewhat baffling. Her life in New York presents no attractions, offering as it does an emotionally distant mother, a job considerably beneath her abilities, a sleazy ex-fiancé, and a ruined professional reputation.

Grier is too grounded a person to embrace for long her mother’s ancient prejudice against working men in Alaska, so her resistance to Mick doesn’t ring entirely true.

A tragedy in Mick’s past still haunts him, as does the death of a researcher he attempted to rescue from the slopes of Mount Denali, but he deals with those issues in an emotionally mature way. He runs a successful air transportation business that also includes opportunities for adventure, heroism, and romantic flights à deux. He’s a darned good catch.

Grier and Mick are hugely likeable characters, as is the large and varied supporting cast. Even the morally debauched fiancé is given a chance to redeem himself in Indigo. The dialogue is snappy, often funny, and sometimes edgy, moving the story along at a page-turning pace.

The setting, however, is what gives Come Fly with Me a special depth. Ms. Fox captures the frontier feel of the Alaskan wilderness, where people have no choice but to depend on each other and where Mick’s airplane is a crucial part of survival. Her description of flying around Mount Denali brings the mountain to vivid life. Grier and Mick’s time in the air on a trip to Barrow is both beautiful and intense. The final scene between the two lovers ties into this particular element of the story in a charming, whimsical way.

Come Fly with Me invites the reader to take an airborne journey with an engaging pair of lovers to discover the beauties of the Alaskan frontier.