Come to This Court and Cry: How the Holocaust Ends 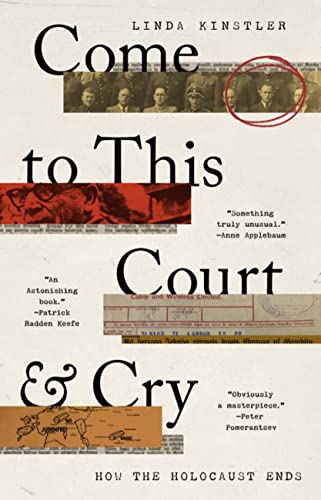 The spirit of the title hints at the message: A British prosecutor at Nuremberg, Sir Hartley Shawcross, encouraged the judges to imagine that all of humanity stood before them, crying out, “These are our laws—let them prevail!”

The subtitle does not imply that the Holocaust has ended but warns that memories of such events disappear or fade, making for uncertainty about what happened, by whom, and to whom.

A graduate student at the University of California, Berkeley, author Linda Kinstler tells the story of how the renowned ”Latvian Lindberg,” aviator Herberts Cukurs, became the “Latvian Eichmann,” a Nazi collaborator tracked by Mossad agents to Uruguay and assassinated in 1965 for his role as a collaborator with Nazis in rounding up more than 26,000 Latvian Jews for execution.

Kinstler discovered that her own grandfather, Boris Kinstler, worked with Cukurs in a police unit known as Aräjs Kommando dedicated to exterminating communists and Jews. The last known facts about Boris suggest that, after the Red Army reoccupied Latvia, Boris in 1949 moved to the Soviet Republic of Belarus and disappeared. How his life ended and by whom remains a mystery.

This story will not boost your trust in the innate goodness of people, but it is a page-turner as Kinstler travels across three continents to study documents in ten archives in many languages to learn about her father’s father (almost unmentioned in her own family) and about how the Holocaust did or did not end (as Latvian officials looked into rehabilitating Cukurs).

Avoiding any simplistic or definitive conclusions, Kinstler provides a model of deep historical research and fluid, engaging narrative. Do we already know everything about World War II and the Jews? About the Baltic nations, brave but not unflawed, as they dealt with Soviet and Nazi brutality? Of course not. Kinstler’s book appears at the same time as the three-evening PBS documentary film by Ken Burns about how the United States did almost nothing to constrain the genocide of Europe’s Jews even though FDR and many Washington officials, and some American Jews, knew a lot about their persecution. Kinstler’s book could also help us think about how Vladimir Putin and his minions should be treated by the International Criminal Court for their attempted genocide of Ukrainians.

Walter Clemens is Associate, Harvard University Davis Center for Russian and Eurasian Studies. He wrote Can Russia Change? The USSR Confronts Global Interdependence, and The Republican Virus in the Body Politic: How to Reboot America.