Coltrane on Coltrane: The John Coltrane Interviews (Musicians in Their Own Words) 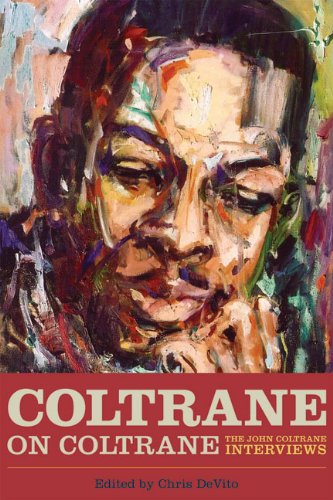 There are a few lucky souls who come into this world knowing exactly what they are supposed to do with their lives. Michael Jordan was always meant to be a basketball player. Bill Gates immersed himself in the world of computers. Imagine how different things would have been if they had tried to switch vocations.

John Coltrane was a jazz musician. Once he picked up the saxophone in high school, there was never any question that he was going to do anything else. Not only was he a solid musician, but he also could intelligently discuss his musical motivations, giving many interviews over his 30-year career. Collected and edited by Chris DeVito, Coltrane on Coltrane: The John Coltrane Interviews gathers together most of the great musician’s words.

Coltrane on Coltrane works not because the man was a musical genius, which in some ways he was, but because he was also insightful and spiritual about what he wanted to accomplish. His musings have a depth to them that many people never find and his comments stand on their own, without having to be interpreted by a group of so-called experts.

In fact, the only slightly annoying aspect of the book was having to wade through several interviewers’ pontifications about what they think Coltrane was doing or where jazz was going. Ever the gracious individual, John Coltrane politely answered each question as it was posed—even if he had already answered it a dozen times before.

It is somewhat shocking to compare the music to the musician. Coltrane’s music was known for his “sheets of sound” (fast groups of running notes that seemed to fill the room with sound). His tone had an edge on it, and a lot of people accused him of “angry” playing.

The musician, on the other hand, was a calm, but driven soul, who would spend hours searching for just the right sound. He was totally devoted to his craft, often losing himself in practice—which he called “wood-shedding sessions.” It is hard not to respect someone who can give themselves so completely to their muse.

DeVito’s book includes the entirety of Coltrane’s poem from which sprung “A Love Supreme”—one of his most iconic works. Whether or not Coltrane was ever really satisfied with his music is unclear—if he ever found the elusive sound that he searched for his whole life—but the last line of this opus certainly indicates that he was grateful for what he had accomplished: “Elation. Elegance. Exaltation. All from God. Thank you God. Amen.”