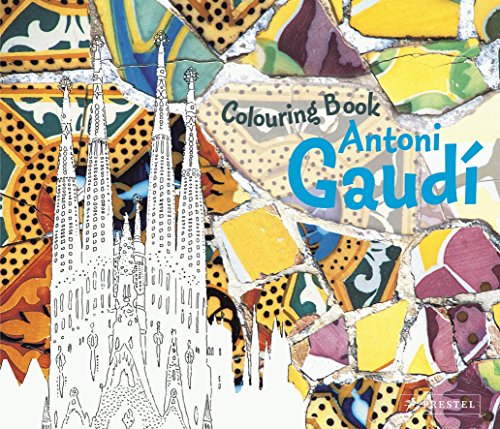 Catalan architect Anotni Gaudí may have been laughed at by many for his whimsical creations, but he went on to become one of the most important architects of the 19th century. His distinctive style was marked by his use of "plant-like building forms, unusual shapes, and bright colors," according to the sell copy on the back of this book. But to really get an idea of just how unusual Gaudí's style was, you have to glean a lot from the art starters and snippets provided throughout this coloring book.

Gaudí's use of wavy lines in his creation "La Pedrera" (the Quarry) also known as the Casa Milà is clearly demonstrated with a photo of the building in question, giving children a clear idea of just what idiosyncracies they are invited to try to duplicate or imitate in their own creation on the opposite page. The artist's use of smashed tiles to create new mosaic materials in abundance is captured at the micro level, inviting children to become a mosaic maker. But the sweeping use of millions of these broken tiles at once and the effect that causes cannot be captured at the macro level in this book, which is a shame. For one of the most distinctive styles of Gaudí was his abundant use of created mosaic and repurposed tile on a massive scale.

There is a rendering of Gaudi's own home in Park Guell in Barcelona that children are invited to color. But it is, as the book warns, a "boring" edifice that could use some childlike imagination to liven it up. And there is a photograph of a house that looks like a cream cake in the area of Barcelona that Gaudí lived that gives children a much better idea of how fanciful and unusual the artist's creations were.

While I would have liked to see many more photographs to give children even more of an idea of who the artist was and the scope of his ingenuity, this is a great introduction to the artist and his style for children whose own artistic tendencies tend to travel outside the lines.