The Color of Compromise: The Truth about the American Church’s Complicity in Racism 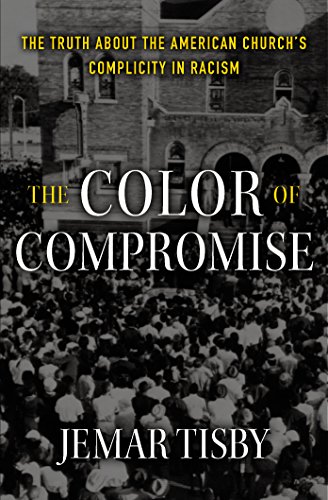 “Tisby, an African American Christian, outlines a devastating bill of particulars in this comprehensive, unrelenting indictment, which he hopes will spur positive change.”

In the Book of Genesis (25:29-34), a famished Esau sells his birthright to his devious brother Jacob for a “mess of pottage”—what scholars say was probably a lentil stew.

Some critics say that America's white evangelical Christians have followed suit. They charge that in November 2016 this religious cohort offered its political support to a resolutely immoral man and an unrepentant racist. In exchange, they were promised conservative U.S. Supreme Court justices who would overturn Roe v. Wade, and reverse decades of reproductive rights.

Others, including some evangelicals, go further, calling this self-serving bargain a pact with the devil, at the cost of the movement's soul. More, they say, white evangelicals have forfeited forever any political use of the “character issue” they wielded so self-righteously against Bill Clinton.

In The Color of Compromise: The Truth About the American Church's Complicity in Racism, author Jemar Tisby argues that this choice of political pragmatism over religious principle is nothing new.

Tisby, an African American Christian, outlines a devastating bill of particulars in this comprehensive, unrelenting indictment, which he hopes will spur positive change.

He writes that white Christians’ love affair with expediency began more than a hundred years before the Constitutional Convention’s infamous “three-fifths compromise” that enshrined slavery into our founding document.

In 1667, the Virginia General Assembly’s Slave Statutes declared that baptism did not change a person's status regarding bondage or freedom.

In the midst of the First Great Awakening revivals that swept the colonies in the mid-1700s, evangelist George Whitefield argued for slavery in Georgia, a free territory. “Georgia can never be a flourishing province,” Whitefield wrote, “unless negroes are employed [as slaves].”

In the Second Great Awakening, in the early 1800s, in Cane Creek, Kentucky, blacks were compelled to congregate in different areas of the revival meetings.

Although exceptions—including some early Pentecostals—existed, “Southern white Christians, far from viewing slavery as wrong or sinful, generally affirmed that God sanctioned slavery in Scripture and that bondage under white authority was the natural state for people of African descent,” Tisby writes.

Post-Civil-War Southern Christians supported the wave of terror that crushed Reconstruction, replacing it with white supremacist “Redemption.” From their pulpits, they supported the Supreme Court’s 1896 Plessy v. Ferguson decision, establishing the doctrine of “separate but equal” and hence provided the legal underpinning for 20th century Jim Crow racial segregation.

In 1915, the Ku Klux Klan was revived at Stone Mountain, Georgia, including among its founders a circuit-riding, Methodist preacher. At its height in the 1920s, Tisby estimates that 40,000 clergymen, North and South, were Klan affiliates. Along with pew sitters, they “bent Christianity to support the Ku Klux Klan and its racial terrorism designed to reinforce white power.”

Among more moderate and less racist Southern Christians, Tisby says, clergy and lay leaders’ failure to condemn the lynchings that swept the region in the early decades of the 20th century “poisoned the American legal system and made Christian churches complicit in racism for generations.”

During the 1960s and 1970s Civil Rights movement, most white Southern Christians supported legal segregation and remained silent in the face of Ku Klux Klan terror. In 1995, the Southern Baptist Convention confessed these sins and repented them.

“At a key moment in the life of our nation,” Tisby writes, “one that called for moral courage, the American church responded to much of the civil rights movement with passivity, indifference, or even outright opposition.”

Yes, there were conspicuous exceptions among white church leaders and members.

“Throughout the civil rights movement, a small cadre of Christians courageously defied the status quo at the risk of their freedom, livelihoods, and even their very lives,” Tisby writes. But “[s]adly, millions of everyday Christians saw no contradiction between their faith and the racism they practiced in subtle yet ubiquitous ways.”

Following major 1960s federal civil rights legislation, evangelicalism “took on a decidedly political tone,” Tisby writes. As part of the emerging “New Right,” “Evangelicals had become a political movement, and the nation was starting to pay attention to them." Alas, Christian complicity with racism remained.

In the 1970s, “Law and Order” became the Republican code term for racism, a shorthand white evangelicals immediately recognized. During that same period, newly active Christian conservatives lobbied and litigated the government and the GOP to return IRS tax exempt status for their racially segregated schools and colleges, like Bob Jones University.

Now, in the 21st century, white evangelicals have migrated en mass to the Republican Party, and have come to dominate the New Right, which has morphed into the Religious Right.

Thus, white evangelicals' targets have broadened. These now include rejection of the Black Lives Matter movement, growing out of the fatal shooting of unarmed young African American men by law enforcement. And by vigilantes like George Zimmerman, who fatally shot Trayvon Martin.

They reject any consideration or discussion of reparations for 400 years of slavery. And, echoing the Ku Klux Klan’s 1920s opposition to legal immigration from anywhere but Protestant Northern Europe, today most white evangelicals reject undocumented immigrants and refugees from nonwhite nations.

In a larger sense, the issue for white evangelicals, Tisby believes, remains “complicity.”

“Historically speaking, when faced with the choice between racism and equality, the American church has tended to practice complicity Christianity rather than a courageous Christianity,” he writes. “Being complicit only requires muted response in the face of injustice or uncritical support of the status quo . . . Christian complicity with racism in the twenty-first century looks different than complicity with racism in the past. . . . It looks like Christians consistently support a president whose racism has been on display for decades . . . The only question that remains is what the church will do now that its complicity has been exposed.”

Tisby’s conclusion is compelling, if not inescapable:

“If the twenty-first century is to be different from the previous four centuries, then the American church must exercise even more creativity and effort to break down racial barriers than it took to erect them in the first place.”

This is a valuable, but ultimately troubling book—which was probably its author’s intent. Genuine Christian faith offers numerous remedies for racism which, as a Jew and a longtime friend of Christians, I applaud. But too often today, followers of Jesus misdiagnose or ignore this social virus. Maybe Tisby's book can be a wake-up call.