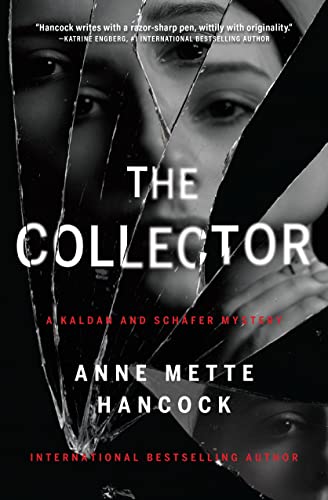 “compelling, rich with suspects, twists, turns, and complex characters, wrapped up with a very gratifying ending.”

A man stands on the earthworks of the Citadel, an old fortress. Below, a car blinks its headlights. He starts down the hill and then sees a hooded figure by the bridge, holding a boy over the water and then letting the child go. Who was the man, who was the figure, and what happened to the boy?

The second in the series, The Collector reprises the primary cast: Heloise Kaldan, an investigative reporter, and her friend, Detective Erik Shäfer, as well as her colleagues in the newsroom and his team in Copenhagen’s Violent Crimes Unit. The journalist/detective trope usually involves very close coordination in crime novels; here, the two operate with some independence, but they share information and have friends in common. The inclusion of Erik’s and Heloise’s individual lives adds depth and texture to the mystery’s main plot.

Chapter Two begins. Heloise is in a relationship with a smothering partner, Martin, and feels increasingly ambivalent about him, while his serious interest in her is growing. Finding herself unhappily pregnant, she visits a clinic in order to receive an abortion pill—she’s certain about aborting the baby and not informing Martin of her pregnancy, but she procrastinates about ending their affair. After being given the requested pill, her doctor, Jens Bjerre, is called to the phone. Heloise overhears part of the conversation, and the reader soon learns that Jens’s ten-year-old son, Lukas, is missing from school.

Jens Bjerre has volunteered with Doctors Without Borders in war zones such as in Afghanistan. His wife, Anne Sofie, is alcoholic. Lukas is reported as a brilliant boy, fascinated with pareidolia, “a phenomenon that makes him see faces in random things.” Interpreting information from optical cues, and forming conclusions based on this process, stands at the thematic heart of the plot as the police and Heloise seek to follow threads and sometimes leap to conclusions, which, in turn, lead them in false directions during their search for Lukas. The plot also includes some forays into people suffering from PTSD and explores the experiences and sensibilities of those who have been in battle, including Detective Shäfer, who instinctively distrusts Jens Bjerre’s “do-gooder” attitudes.

Even without reading the first in Hancock’s series, The Corpse Flower, the author has done an admirable job landing us in this second book, allowing the reader to become familiar with the carryover cast and doing so seamlessly. The secondary plots, such as the relationships between Heloise and Martin or with her close friend Gerda, and Shäfer’s pining for St. Lucia, where he has just returned from vacation with his island-born wife, make the players dimensional and fully realized. The victim, Lukas, is drawn with nuance, perception, and a touch of ambiguity. Unlike in many crime novels centered around an abduction or murder, he is a unique creation, not merely a cardboard “child in distress.”

The novel is translated from Danish (the translator’s name only appears buried in the copyright page). When reading a translation, it’s impossible to distinguish between the author’s original text versus how the words are converted into English. In The Collector, some of the lines are awkward: “Shäfer’s wife stuck her big, dark head of hair out.” Or: “his shoulder-length, pigmentless hair looked as if he had just stuck a pair of chopsticks into an electrical outlet.” And: “stuck his fork into a prawn the size of a Shetland pony . . .” A calming editorial hand might have reined in these overblown, odd descriptions. Even so, the writing is on par with the genre and doesn’t impede the reader’s enjoyment.

The Collector isn’t an on-the-edge-of-your-seat thriller like novels written by Lars Kepler or Jo Nesbø, but it’s a very intricate, well-constructed suspense, with a sophisticated premise about how we sometimes misinterpret what we believe we’ve seen. This story is compelling, rich with suspects, twists, turns, and complex characters, wrapped up with a very gratifying ending.