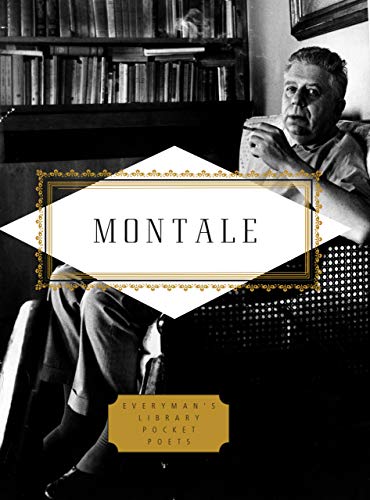 "Montale generates a new world of radiant objects and ideas in his long poetry career."

Eugenio Montale (1896–1981), arguably the greatest modern Italian poet and critic, recipient of the 1975 Nobel Prize in Literature, deserves revival through Everyman’s Library Pocket Poets series. The popular series boasts over 100 titles—inexpensive, transportable, and yet beautifully printed, bound, and sewn with emerald ribbon markers. Perfect for a trip to the Italian Riviera.

Jonathan Galassi’s creative introduction begins as a story about our speaker: “. . . melancholy, solitary, obsessed with death and his past, preoccupied with limitations, both his and his world’s.” But a mysterious “she” emerges in Montale’s work, first as an “fierce angel” then as a “Dark Lady.” These powerful feminine forces “meld into one life-giving figure” that attempt to rescue the speaker from his alienation and anxiety. Although the illusion evaporates, “the dream of faith in a saving other endures as the essential meaning” of the poet’s story. This faith is beautifully expressed in “Levantine Letter,” written to the poet’s first love, Anna degli Uberti, in 1923.

I know you were already by my side

in those moments, that you are there still,

though distant, on this worn-out day

that ends without apotheosis;

and that together we’re watching

among the breakers and thick mists

the reefs of the Cinque Terre whiten

lashed by the surf.

Much of Montale’s verse, however, is more enigmatic. Often deemed obscure, defying explication, and hermetic, he has frustrated his best readers. Joseph Brodksy described Montale’s voice as “muttering—to himself”; Alfred Corn found the poems “undeniably difficult.” A newer generation poet-critic, David Biespiel, exclaims, “I love Montale—he’s exhaling his interior imagination. And that comes randomly, sometimes through umpteenth ambiguity and without context, but it works wonderfully.”

Montale is not for readers craving a Robert Frost parable, a crisp W. C. Williams vignette, or easily unwrapped revelations, although clear, stunning epiphanies do arrive:

The heart that disdains all motion

now and then is convulsed by a jolt.

As sometimes the stillness of the country

sounds with a rifle shot.

Montale’s poetry is soaked with imagery of the Italian countryside, beginning with his family’s summer home on the Ligurian coast, the Italian Riviera, where “briny gusts rose to my heart,” where the sea and wind gnaw at the land, tumbling the detritus of cuttlefish bones, starfish, cork and tangled seaweed. There are recurring images of eels, birds (named by species to delight the ornithologist), butterflies, cicadas, lemon and pine trees, sun-scorched rocks. From Genoa, Florence and Milan there are keyboards, balloons, boats, grottoes, flags and people in the crowded streets. These visual accretions—both representational and surreal—suggest, as Biespiel notes, complex interior states. Sometimes these metaphoric images are served expositionally:

The octopus that works

inky tentacles among the shoals

knows how to use you. You belong to him

unwittingly. You’re him; you think you’re you.

But more often the meaning remains wedged in the rocks of the scene. “Don’t ask us for the phrase that can open worlds,” he writes in “Cuttlefish Bones” from the early 1920s. But of course, the poet spends his life searching for such phrases.

Montale is often compared to his contemporary, T. S. Eliot, and the two bemoaned a fragmented, faith-shaken civilization after World War I—Montale served as an infantry officer in the last year of that war. Their moral landscapes can be cruel, there are feelings of cultural and romantic alienation, but Montale doesn’t embrace Christianity or Fascism, and 21st century readers don’t need extensive footnotes to navigate his allusions. Galassi claims that Montale was “the last major Italian poet to see his spirit as fundamentally consonant with those of his predecessors,” but this regard for tradition isn’t worn as the heavy red robes of Dante. Montale’s voice feels fresh and contemporary. In his essay, “Intentions (Imaginary Interview),” Montale says he “wanted to wring the neck of the eloquence of our old aulic language, even at the risk of a counter-eloquence.”

Ancient one, I’m drunk with the voice

that comes out of your mouths

then implode and dissolve.

This deep history of Italian language and empire rears an uglier head in the form of nationalism, the Mussolini dictatorship, and another world war. Montale composed musically charged image-catalogues to describe the horrors this era.

and then the awful crack, the timbrels,

tambour-rasp above the pit of thieves,

stomp of the fandango, and a few

you turned and, forehead

cleared of its cloud of hair,

you waved to me—and went into the dark.

In “The Hitler Spring,” unpublishable during the war, he speaks explicitly about a rally celebrating the Fuehrer’s meeting with Mussolini in May 1938: “. . . chanting thugs; an orchestra pit, / firelit and arrayed with swastikas.”  And though Montale hated fascism, he confesses, “. . . non one’s guiltless anymore.”

Montale lost many friends, his house and all his books in the war, but his poetry grew stronger, and nature and femininity rose again as his redeemers. In perhaps his best loved poem, “The Eel” (1948), we experience a lyric to the primal forces of nature as they reflect human sexuality, endurance and renewal. Although the eel is often configured as phallic, this force “fires her flash / in stagnant pools.”

arrow of Love on earth,

whom only our ravines

or desiccated Pyrenean brooks lead back

to Edens of generation.

Montale elevates what many consider a slimy, creepy creature into nature’s heroine—“can you fail to see her as a sister?”

From angels to eels, Montale generates a new world of radiant objects and ideas in his long poetry career. This Everyman’s edition is a modest monument to that supreme achievement.