The Collected Poems of Ai 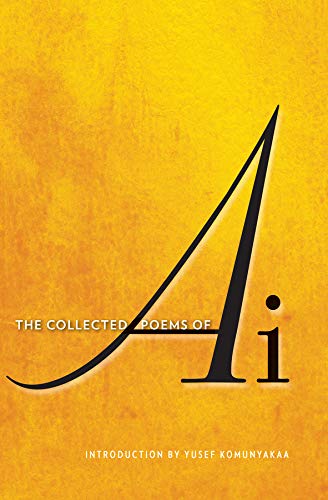 For more than half a century most mainstream, accessible, non-experimental, American poetry has been autobiographical. But where other poets zigged the poet whose penname was Ai and whose legal name was Florence Ai Ogawa zagged; for four decades preceding her death from breast cancer at age 62 in 2010 she mostly wrote persona poems: first person dramatic narratives in the voices of fictional or historical characters.

Now that W. W. Norton has collected all eight of her books of poetry in a single volume readers can more easily see the evolution of her poetic oeuvre over those four decades from the short, intense, sexually frank and graphically violent poems of her early books to the longer, more discursive narrative poems of her later work, though violence remained an important element throughout.

The poems in Ai’s first book Cruelty (1973) are portraits of rural poverty in the American Southwest where she grew up. Nearly all of them are violent and many are also sexual, but this is not the intoxicating blend of sex and violence found in rock music; instead these elements combine in the context of complicated, ambivalent, and in some instances abusive relationships. The poems in the voices of women describe female sexual desire and indicate that the speaker’s libido is part of why she stays with her partner.

In her next book Killing Floor (1979) Ai introduces poems in the voices of historical personae: Leon Trotsky, the Japanese novelists Yukio Mishima and Yasunari Kawabata, a German soldier on the Russian front in 1943, Marilyn Monroe, a Spanish conquistador in 16th century South America, as well as anonymous personae. Ai finds villains her most compelling characters. In “The Kid” the speaker is a boy who describes how he brutally murdered his parents and sister,

“Then I go outside and cross the fields to the highway.
I'm fourteen. I'm a wind from nowhere.
I can break your heart.”

Sin (1986), opens with “Two Brothers” in which addressing his brother Bobby President Kennedy’s ghost describes his own assassination.
In “The Testimony of J. Robert Oppenheimer” the lead scientist of the Manhattan Project discusses his loss of security clearance and rivalry with Edward Teller a decade later. Read the Wikipedia article on Oppenheimer and then read the poem: Ai nails it. “The Man with the Saxophone” is the only lyric poem in Sin, and for that matter all Ai’s early books, and it’s a beauty.

In Fate (1991) the personae include the ghosts of Mary Jo Kopechne (who tells Edward Kennedy “Jack or Bobby would have died with me”); Lyndon Johnson; Jimmy Hoffa; Lenny Bruce; General George Armstrong Custer; James Dean; Elvis Presley; and Alfred Hitchcock, as well as less famous personae including “The Cockfighter’s Daughter” who finds her father killed by his rooster

“face down, in his homemade chili
and had to hit the bowl
with a hammer to get it off,”

Greed (1993) has a few historical poems but Ai’s focus largely shifts to current events including the 1992 Los Angeles riots, the drug arrest of Washington D.C. mayor Marion Barry, and Mike Tyson’s rape case. Twenty years after the publication of her first book this is the first poem in which Ai, a mixed race (but by America’s one drop rule African American) poet, addresses the issue of race. Some of the poems are written in urban vernacular.

There are also poems on the sexual abuse of children including one in the voice of an accused Roman Catholic priest. “Lust, Love, and Loss” is a steamy four-part poem about adult relationships and their disappointments told from the woman’s point of view.

Ai’s earlier work largely eschewed enjambment, which she did employ in some of the poems in Greed. Throughout her oeuvre she used internal rhyme, but starting with Greed she made more frequent use of full rhyme than she had previously, though her work is not strictly formal.

Vice: New and Selected Poems (1999) gathered poems from her first five books plus 17 new ones and won the National Book Award. Several of Vice‘s new poems appear to be accounts of true crime as well as other current events of the 1990s including the genocide in Rwanda, President Clinton’s affair with Monica Lewinsky, and the AIDS epidemic. In Dread (2003) Ai adds more poems on current events (9/11 and the death of JFK Jr.) and looks back to her own out of wedlock birth.

In his introduction to The Collected Poems of Ai Yusef Komunyakaa compares Ai as a writer of dramatic monologues to a method actor. If so, what was her motivation? What were the inner emotional traumas that sparked her imagination? In “Grandfather Says,” a lyric poem, we learn that her grandfather sexually abused her when she was ten. In her last decade, after the death of her mother, Ai turned her attention to her family’s history, first in Dread, and at greater length in her last book No Surrender (2010).

Ai’s biological father was Japanese-American and her mother’s ancestors were African-American, Choctaw, Southern Cheyenne, Irish, and Dutch. The speakers in No Surrender tell personal histories of Japanese, Irish, and Native Americans of various generations. These longer poems have the feel and narrative structure of short stories (some with surprise endings) yet maintain the cadence of verse. Two poems are written in long Whitmanesque lines in the manner C. K. Williams employed in his middle decades.

Ironically for this writer of dramatic narratives the book’s last multipart poem about her final illness, “The Cancer Chronicles,” is written in the third person. At the end of what should have been a longer career Ai showed she could write autobiographical poems as well as any of her contemporaries.