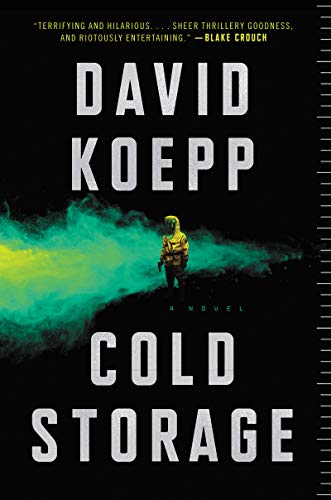 “In Cold Storage, David Koepp easily transfers to novel from his experience as the screenwriter of such recognizable movies as Jurassic Park and War of the Worlds . . .”

Most of it sank into the Indian Ocean, but an extra oxygen tank landed in Western Australia, near the aboriginal village Kiwirrkurra.

It wasn’t a large something but a fungus—Cordyceps—able to survive the extreme conditions of outer space.

Cordyceps sleeps peacefully inside the oxygen tank in an Australian aborigine’s backyard, until the day he decides to clean it. Fed by the nutrients in homemade cleanser combined with the rust it accumulates, Cordyceps awakens.

This is the story of that little fungus and how it grew . . .

By the time anyone is aware, Cordyceps has absorbed all 26 members of the village and decides its next step is world domination.

“We sent up a hyperaggressive extremophile resistant to heat and the vacuum of space that returned to earth and found a safe, protein-rich environment. I think we created a new species—Cordyceps novus.”

Before fire-bombing Kiwirrkurra and the fungus, agents Roberto Diaz and Trini Romano gain permission from Gordon Gray of the Defense Threat Reduction Agency to obtain a single sample of the fungus, which is sealed inside a biotube placed 300 feet underground in a subbasement that doesn’t officially exist, in a facility in Atchison, Kansas.

“The storage plan for Cordyceps novus was perfect, unless Gordon Gray took early retirement and his successor decided sub-level 4 was better off forgotten, and the temperature of the planet rose.”

Something in Atchison, Kansas, has activated an alarm, in a building that used to be a government facility but is now a civilian storage unit housing items people don’t want but can’t bear to part with.

Roberto may be retired but he privately relishes the call to action, devastating as it may be. Reunited briefly with Trini, he finds himself patched through to a cell phone inside the facility.

“The first colony was a bit like Reno, Nevada, popular once but limited by location and climate. Aboveground, however, on a hillside was a second colony, and it was similar to Los Angeles, slow, inevitable, and in no one’s best interests. On the main floor of the storage facility, another colony was enjoying the least success. Like Atlantic City—it used to be a big deal but now dead on its feet. Last but not least, a fourth colony learns to transmit information and instructions to its host.

Naomi and Teacake are trapped inside with a group of people infected by the astonishingly intellectual fourth colony.

It’s up to one 68-year-old retired agent with a bad back and two very unqualified twenty-somethings to save the world.

Thank you, David Koepp for giving us Roberto Diaz, a man considered past his prime age-wise, but one who can still show the millennials how it’s done, even when he’s flat on his back with a slipped disc!

This author not only has penned a great scifi/horror novel with some memorable characters, but also injects it with a very wry and dark humor. This is best in evidence in his descriptions of the thought processes evolving within Cordyceps novus.

There’s enough scientific jargon to give the story an authentic tone that may send some readers running to Wikipedia or other information sites for more on Cordyceps, while giving them shivers at the implications of what such a small sac fungi can do. (Remember the tardigrades that recently crashed on the moon and keep your eye on this species. It’s going places; it’s been featured in several video games and is an up-and-coming menace in several movies.)

In Cold Storage, David Koepp easily transfers to novel from his experience as the screenwriter of such recognizable movies as Jurassic Park and War of the Worlds, giving this story the sense of immediacy and danger those films contain. The cuts between what’s happening inside and outside the facility would work very well in a motion picture.

He also gives the reader an extensive biography of the more notable characters, so we are not only familiar with them but will ultimately be touched with their fates. No one is simply introduced and immediately dispatched/written out without us knowing his name, occupation, and various eccentricities.

Cold Storage is one of the most intriguing, frightening, yet entertaining novels of this genre this reviewer has read in a long time. Easy to read, easy to understand, its characters are enjoyable, brave, clever, and surprisingly funny in the face of catastrophe.