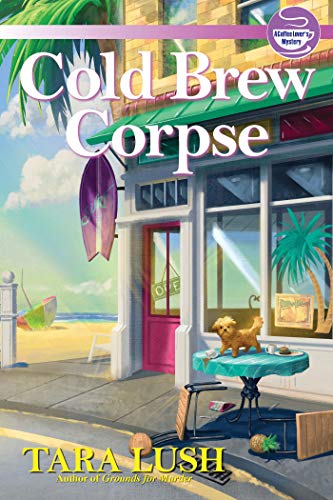 “Lush has done a good job of developing strong characters and a good premise.”

Lana owns Perkatory, the award-winning coffee shop on the island, and it happens to be next door to Dante’s Inferno yoga studio that Raina owns. While managing her coffee shop, Lana, a journalist in another life, draws out Raina’s disappearance through her investigation until Raina is found dead in Angelwing Park swamp. At that point she goes into full undercover mode.

As with most cozies, Cold Brew Corpse has all the required steps to lay out a cozy mystery. The female main character (Lana), her best friend (Erica), the love interest (Police Chief Noah), the small business (Perkatory) in a small town (Devil’s Beach) where everyone knows everyone else’s business. And of course, the cast of characters, in this case six possible perpetrators (Kai, Shawn, Jennis, Molly, Heidi, and Heidi’s husband); several secondary characters who add color to the story (Dad, Mike the local newspaper editor; Cody the newspaper’s only photographer—an instantly dislikable character; and several others who appear to fill out the background of the story.

Lush has done a good job of developing strong characters and a good premise. Many cozy heroines have no reason to inject themselves into a murder investigation other than just being curious or believing that they are the only person who can prove the innocence of the friend or family member who has been charged with murder. In this case, Lana is a journalist who lost her job but not her interest in researching interesting cases, interviewing suspects, and writing articles for the local newspaper. This gives her more legitimacy for snooping.

The requisite love of her life, Noah Garcia, Chief of Police for Devil’s Beach, is given an almost equal (and definitely competent) role—he is not portrayed as an inept police officer as seen in many cozies, and Lush gives him an adequate role in working with Lana while at the same time attempting to draw her down from her investigative mode.

Lush’s writing is good, and she adds humor in certain places that will bring a chuckle to the reader’s lips. The only drawback may be seen by some as the amount of time she spends being very gooey about the burgeoning relationship between Lana and Noah. There is a lot of flushing, blushing, heart thrumming, and the like every time Lana sees, encounters, or thinks about Noah. Although this may be seen by some as overkill, cozy-lovers may expect such behavior from their heroine.

In setting up her various suspects, Lush keeps the reader guessing as to who is the primary suspect, and it is not until the mandatory climax scene at the end of the story that she exposes the murderer, possibly to the surprise of the reader.

Lovers of the cozy mystery will find Cold Brew Corpse to their liking and will set up the expectation and anticipation of the appearance of the next book in the series.