The Codebreaker's Secret: A Novel 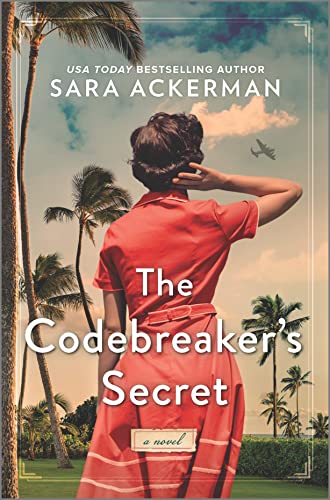 When Isabel "Izzy" Cooper loses her beloved brother Walt after he gets shot down in Pearl Harbor by the Japanese in World War II, she wonders how she can go on. It wasn't that long ago that her mother died, and soon after, her father crawled into a shell. Walt and Izzy were always close.

Shy and somewhat introverted, Izzy is exceptionally well educated and has an uncanny skill for deciphering foreign codes, putting America one step ahead of its enemies. To assuage her grief, she joins the Navy and works in Washington, DC, as a code breaker, discerning plots the enemy has planned to take over the U.S.. Though the job is tedious and brain-racking, she enjoys it along with the camaraderie she has with a few other women in her office.

Izzy hears there may be an opening in Hawaii, so she works tirelessly to prove she can handle the assignment. The only problem: It's 1943, and females are not usually accepted in the workforce, especially in high-security positions. But her brains and tenacity work in her favor, and she is thrilled to be given this opportunity. She wants to avenge Walt's death and meet his best friend, Matteo Ruzzi, whose letters were filled with stories about their closeness and the things they did together. Walt also shared his love for Hawaii in his correspondence, stating he hopes to start a coffee farm there with Izzy when the war ends.

Hawaii's temperate climate and beautiful sights warm Izzy's heart, and she does not miss the frigid DC winters. What she does miss is the friendship she had with her co-workers, for now male colleagues surround her, and they let it be known she's unwelcome. Izzy's habit of humming while working helps her concentrate better, though it annoys her fellow workers.

Izzy is assigned a lovely little cottage along with a roommate named Gloria. Though introverted, Gloria includes Izzy in after-work outings with some other friends. They are happy to welcome her and are curious about Izzy's position, but she lets on she's a secretary.

It takes a while for Izzy to adjust to the male-dominated office consumed with cigarette smoke, which makes it difficult for her to breathe. Her workplace, known as the Dungeon, is underground with offices sans windows, meaning it is dark and dank. Though not trusted or acknowledged, before long, Izzy proves her skills by breaking a critical code and receiving her colleagues' acceptance.

Gloria invites Izzy out for drinks with friends, and this is when she meets Matteo. They chat a bit, and he offers to take her places he and Walt went, claiming that Walt was more than a brother to him.

Matteo, whom everyone calls "Ruzzi," is so handsome and charismatic that he takes Izzy's breath away, but she's not looking for romance. Though she's drawn to the charming pilot, she realizes he has quite the reputation as a ladies' man. Izzy does not want to get involved or get her heart broken. She's there to work and learn about Walt's last days.

The story next segues twenty years in time to 1965, which is a disconcerting why of this switch. A posh resort is recently built on the island by the Rockefellers, and only important guests have the honor of an invitation—one who happens to be Ruzzi, now a world-renowned photographer. Included are some government dignitaries, and Joni, a young singer now gathering fame. Lu Freitas, a Hawaiian native and up-and-coming Sunset magazine journalist, is hired to write about the resort because she knows about the country. When Lu engages with Joni on the trip to the island, they instantly bond. Lu is enthralled to encounter Ruzzi, whom she's idolized for years for his impressive photos, and now Joni is a new friend, too.

So where does this all tie in? While the war rages and Izzy puts in long hours, Gloria meets a serviceman man named Dickie, who sweeps her off her feet. Izzy is concerned, for she perceives Dickie as a shady character, but it's not her place to say anything. When Gloria goes missing, Izzy firmly believes Dickie has something to do with her disappearance. Gloria had been dropping hints about him, especially regarding a letter she happened to see in his house that gave her concerns that he could be dealing with the Germans.

A search commences, and Gloria is not located, but when Izzy goes to Dickie's, she finds him beat up and surly. He states his distress about Gloria and says he tried to save her, but the riptide pulled her away, and she drowned.

Twenty years later, while at the Rockefeller's hotel, Lu is scheduled to meet Joni for an early morning swim. When she's not at the beach, Lu searches for her, checking her room and every place else she thinks she may be. She contacts Ruzzi to help her look and mentions how she has noticed the senator eyeing Joni since their arrival. Where is she? Could he be the unmentioned older lover Joni mentioned she's been seeing? Everyone sets about to find Joni before calling in the police, but when Lu and Ruzzi come upon bones in a lava tunnel off the shore, they know the authorities must be notified.

Do these two missing women have anything in common other than going missing and allegedly drowning? A thriller for sure, in The Codebreaker's Secret Sara Ackerman has done her research. Intense, suspenseful, and filled with mystery, flora, and fauna of Hawaii, the climate, the vernacular, and the total beauty of the location adds great setting. The in-depth knowledge of a codebreaker's duties adds to the intrigue. What is most surprising is the unexpected and consoling ending that brings peace and understanding to 20 years of heartbreak and pain.