Code Over Country: The Tragedy and Corruption of SEAL Team Six 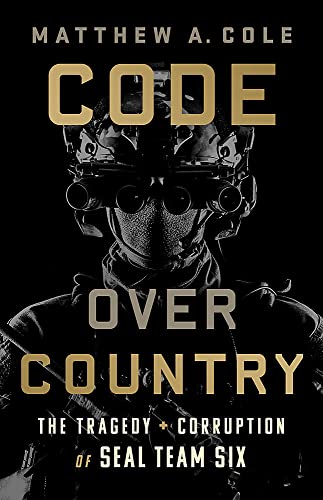 The Navy SEALS are the elite of the elite in the military of the United States. They train for missions according to their acronym: SEa, Air and Land. They serve and fight in all three environments, when necessary. To achieve their objectives, they must be intelligent, the most psychologically prepared and physically fit of all members of the armed services, in addition to being expected to always be honorable and forthright.

Unfortunately, according to author Matthew Cole, that has not always been the case, especially so in terms of SEAL Team 6, best known for their successful mission of killing al-Qaeda head, Osama bin Laden, on May 1, 2011. He believes that a code of silence exists where each SEAL has another’s back no matter what may have transpired on duty. In effect, country comes second if it means protecting one’s own from consequences or repercussions, especially in terms of war crimes.

The development of the military’s Special Forces goes back many decades. Indeed, the US Army’s Rangers take their cue from the tenets of Roger’s Rangers of French and Indian War fame more than 250 ago. Rogers’ code of tactics, if you will, are ingrained into all Ranger school graduates, much the same as the history of the Marine Corps for each Marine to develop the necessary pride and esprit de corps.

However, these mostly tend to be conventional forces that serve in environments of symmetrical warfare and are at least expected, if not required, to follow the so-called established rules of engagement according to the generally accepted rules and laws of international warfare.

For the SEALs, this has not always been the case as they have many times been committed to missions that have not always had a clear, present, and obvious enemy, uniformed and maintaining coherent lines of defense or offense. Frequently, this has led to errors, mistakes, and accidents on an asymmetrical “battlefield” whereby civilians and other innocents may have been targets and victims.

Indeed, on one mission in Afghanistan, a female intelligence officer, masquerading as an aid worker, targeted for recovery from insurgents, was accidentally killed by SEALs, through a violation of operational protocol. The US government was forced to apologize to the officer’s home government although the circumstances of the incident were not released to the American public, intended obviously to maintain the SEALs reputation as the best.

In another instance, a SEAL was accidently killed in what was essentially a hazing incident by fellow SEALs. Any consequences suffered by those involved were similar to those imposed by the Catholic Church on suspected pedophile priests: transfer to another jurisdiction where one’s previous actions are not scrutinized or questioned.

This alleged code of silence extends virtually all the way back to the original establishment of the Special Forces and, potentially, through their training programs and manuals. In the military where each service member is expected to have the other’s back, it is seen as disloyalty to basically “snitch” on a comrade.

Of course, not all SEAL missions and actions have resulted in a downside. There have been any number of obvious successes—even if the American public doesn’t always know the details. As a result of the classified nature of these operations, that isn’t always possible in order to avoid providing critical intelligence to an enemy on how they operate.

One other complication, according to the author, is that many times former SEALs go on to capitalize on their experience and connections in the civilian world. Much of this is in the form of leadership and self-defense training, corporate and personal security. Nothing wrong with that as long as one stays within the bounds of the law, of course, which does not seem to have always been the case.

Ultimately, Cole has pealed back the layers and revealed what the cover synopsis characterizes as a “troubling pattern of war crimes and the moral rot beneath the authorized narratives.” It’s not what we want to hear regarding these elite warriors but, by the same token, it shouldn’t be surprising when one considers SEAL training, objectives, and the potential psychological consequences of such a “lifestyle,” i.e. PTSD and its attendant problems from repeated deployments.

Not all SEALs, or all service members for that matter, can or should be painted with a broad brush. However, there seems to be enough available evidence here that there are underlying problems that need to be addressed by the chain of command for the edification of society, government, and the military.