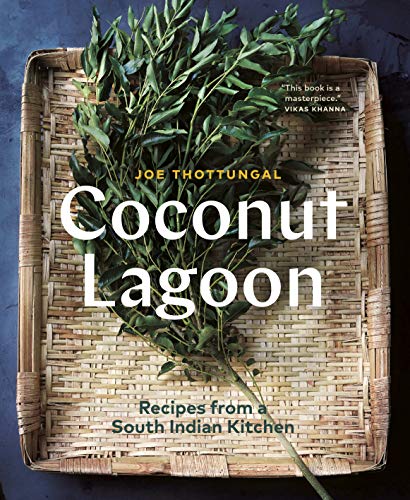 “Thottungal’s passion and love for Kerala fare are evident in each and every recipe and are the ultimate guideposts for anyone who wants to know more about the distinctive food of Kerala.”

With its quiet backwaters, emerald green rice paddies, and graceful coconut palms, Kerala has been dubbed “God’s Own Country.” The Kerala Tourism Department came up with the slogan, but it is a perfect description of a land steeped in tradition and history.

Joe Thottungal’s book Coconut Lagoon: Recipes from a South Indian Kitchen is a celebration of Kerala and its unique and delicious cuisine.

Kerala is located on the famed Malabar coastline in south India and its cooking is defined by its locale. Rice, fish, coconut, along with an abundance of spices, are featured in traditional Kerala dishes. Peppercorns, mustard seeds, curry leaves, cinnamon, chiles, cardamom, cloves, turmeric, and asafetida add fragrance and flavor to Kerala cuisine.

Kerala’s rich religious and cultural diversity has played an important role in its food. Many Hindus, Muslims, and Christians call the state their home, and the influences of each culture can be seen on the dinner table.

When a Canadian immigration officer told Thottungal “cooks like you are needed in Canada,” the young chef took these words to heart and eventually founded the famed Coconut Lagoon restaurant in Ottawa, Canada. His journey from a mid-sized town of Thrissur, Kerala, to Ottawa reads like an odyssey, a journey of heroic proportions.

His childhood home was surrounded by orchards bearing everything from coconuts to guavas and breadfruit. He loved when the Southwest Monsoon hit his state because it meant fewer chores for him and his brothers and more time to fish in swollen ponds, climb cashew trees, and play hide and seek among the damp laundry hanging out to dry.

His mother was a creative cook and “nothing was ever wasted in our home. Food was precious, food was preserved.”

But his mother was also a working woman, a clerk at the local agricultural university, and this meant his siblings and he would come home to an empty home with hungry stomachs. So Thottungal started preparing snacks, and soon he was washing rice, chopping vegetables, and cutting up fish to help his mother. A chef was born in that humble kitchen.

Measuring ingredients is not that important, Thottungal writes, but “I cannot stress enough the importance of mise en place. That’s a French cooking term that means ‘set in place’ and it refers to having all ingredients measured out and ready to go before you start cooking.”

This is especially important in Kerala cooking because spices are added rapidly to hot oil. To help the home cook get started, Thottungal has a “spice box” of essential Kerala ingredients from Adzuki beans to jaggery and tindora (a kind gourd known as ivy gourd or scarlet gourd).

Kerala is famous for rice, and so it’s not surprising that this grain is used to create breads. Appam or hopper is a unique bowl-shaped Kerala delicacy made of fermented rice and coconut. Its light flavor is perfect with spicy curries and tangy chutneys. Chapatis, Dosas (fermented crepes), Poories and Malabar Parathas (coiled and layered bread) are all featured in the Bread section of the book. Rice is a Kerala staple and a chapter is devoted to rice dishes from the tangy Curd Rice to flavorful Tomato Rice.

Once the harvest is done, Kerala farmers celebrate with a festival called “Onam” featuring a feast or “sadya.” Traditionally served on fresh banana leaves, the sadya features a number of dishes from Cabbage Thoran to Chickpea Curry, Aviyal and Pumpkin Erissery.

In the Sea section of the book, fish and seafood play an important role in dishes such as Shrimp Malabar and Fish Roasted in Banana Leaf.

Cook’s Curry, Duck Kumarakom, and Lamb Korma are featured in the Land chapter.

Thottungal has brought a slice of exotic Kerala to home cooks with his easy-to-follow directions and eye-catching photographs. Thottungal’s passion and love for Kerala fare are evident in each and every recipe and are the ultimate guideposts for anyone who wants to know more about the distinctive food of Kerala.