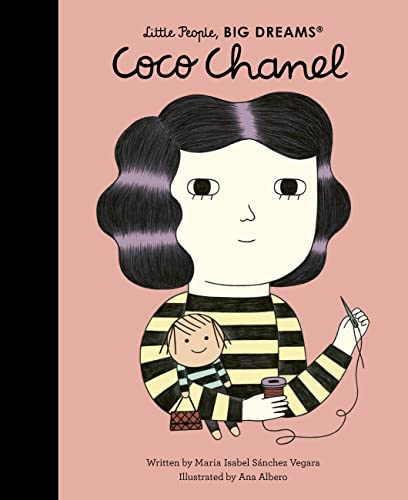 Coco Chanel is a fashion version of Cinderella—minus the Prince Charming since she had so many Prince Charmings. This is not the only children’s book based on her life, but why exactly would a child want to know about her or even care? Yes, Chanel was a fashion icon, but does some barely kindergarten aged little girl have the vaguest idea of who this woman was and what she stood for?

It is a puzzling situation since if in fact a child of this age does want to know more, which biography will you hand to her as a follow up, the one where Chanel is accused of being a Nazi sympathizer of the ones that detail her sexual exploits and liaisons—or maybe the one where there is the thinly veiled accusation of her being a lesbian? Few, if any kids are this precocious.

Without question, this is a book that offers the thinnest/vaguest accounting of Chanels’ life and how she rose from poverty to fame by persevering and following her dream. So the fairy tale premise or prerequisites have been fulfilled, but again this is hardly bedtime reading no matter how sophisticated your six year old might be. Camilla Morton wrote fairy tales using designers as the subject, but hers were intended more as an amusement for adults rather than being geared to youngsters.

It would be a sort of revelation if there are kids whose interests are actually this deeply immersed in fashion since common sense dictates the child might be more interested in Cinderella, SpongeBob, or Dora the Explorer.