The Clover Girls: A Novel 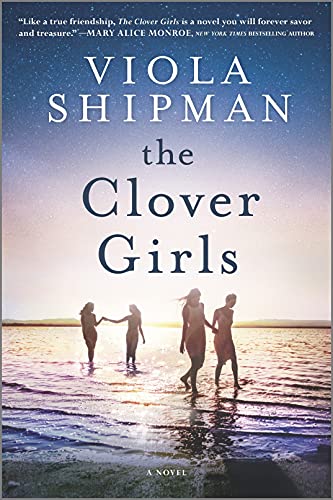 Oh, the joy! The Clover Girls will please new readers as well as anyone who has already discovered the work of international bestselling author Viola Shipman (the pen name of Wade Rouse). This story may be his best yet, taking readers on a heartwarming trip down memory lane.

While bibliophiles of all ages and backgrounds will savor this sentimental story, Gen-X’ers will relish the flashback to their youth. Every detail brings childhood moments to mind, from jelly bracelets and friendship pins to Madonna, Wham!, and John Hughes movies. They’ll savor each page of this beautiful journey.

Although it offers a fun, and sometimes funny, tale about friendship, The Clover Girls goes deeper than a surface-level story of summer smiles and sassy teens, nudging us to examine how childhood relationships impact our lives and why we too often let them fade.

To add another layer, the author encourages us to look back at our younger selves and rediscover the dreams we once held dear. Not only to recapture the magic of innocence and hope, but to reclaim the goals we may have lost along the way. To refuel the passions that once stirred our souls.

The novel centers around four girls who first meet at Michigan’s Camp Birchwood in the summer of 1985. While not everyone has experienced the privilege of summer camp, most can relate to the main characters, Elizabeth, Veronica, Rachel, and Emily, who spend the next four summers calling themselves The Clover Girls and celebrating those few weeks of annual freedom—until that last summer pulls them apart in a way that leaves wounds.

Now approaching middle age, the women are facing challenges they never imagined. As they struggle with their marriages, children, and careers, they no longer recognize the face in the mirror. Just when life starts taking its toll, Liz, V, and Rachel receive a letter from Em, a message that delivers devastating news.

Em implores the three former best friends to reunite at Camp Birchwood one last time. She’s hoping they’ll spend a week together, revisiting the dreams they’ve since put aside and repairing the relationships they’ve allowed to sour. But time has changed them. They are no longer the idealistic, confident girls who once ruled Camp Birchwood. So what will happen when they dare to open the door to the past? And can old resentments be put to rest at last?

In the words of Liz:

“The camp is located on the forty-fifth parallel, a line designating the latitude halfway between the earth’s equator and the North Pole. Many Michiganders believe there is an invisible force—a migrational pull, if you will—that draws people here not only to vacation but also to settle. That pull has created a mecca for artists and photographers. Many are drawn here by the forty-fifth’s magical light.

“I look over the woods and water as the late afternoon sun illuminates the cattails and reeds, the loons and birds, the sand and the birch. It is a soft light, almost ethereal, and everything looks draped in golden gauze.

“I shut my eyes. I can see all of us together, in our too-big camp T-shirts and too-big hair for our little bodies, gathered on the dock for our first camp photo. I can still hear the campers and counselors yelling. Birchwood forever! I can still remember the day we all met, Em finding that four-leaf clover, which began a legend and a downfall as fiery as any from Greek mythology. I can still hear us singing our camp song.”

As seen in this passage, Shipman does a great job building the setting at every turn. Readers never lose a sense of time and place, even with the flashbacks, and he brings Michigan to life in a way that transports us to that pristine wilderness, offering a lovely escape.

But it’s not just the setting that satisfies readers. In classic Shipman fashion, he also weaves a believable narrative by bringing together four distinct personalities. Again, through the lens of Liz, we can see an example of how the different women build a complex story:

“I’m also now—and have always been—caught between two friends who are more alike than they would ever care to admit. Despite V’s sabotage, despite their rivalry, she and Rachel have much more in common than I ever had with them—looks, personality, leadership, popularity, lives that ordinary folk like me aspired to live—and I still feel that jealousy that I tried so hard to bury. They also had more opportunity than I could ever imagine. When your world is small, your chances are, too.”

“I lie for the longest time, not moving, and then sit up on my elbows, staring at Friendship Rock. I think of Em—so sick when she was here—somehow finding the strength and courage to swim out to that rock and leave a message of hope, strength and love for all of us.

“She was alone. But she was not alone.

“I turn and look at my friends, their eyes closed, half-asleep.

“Em left all of us a sign. But we had to find it. We had to be aware enough to see it.”

Ideal for summer, Shipman has written a redemptive tale, celebrating the power of friendship while focusing on what matters most. Perfect for the beach!