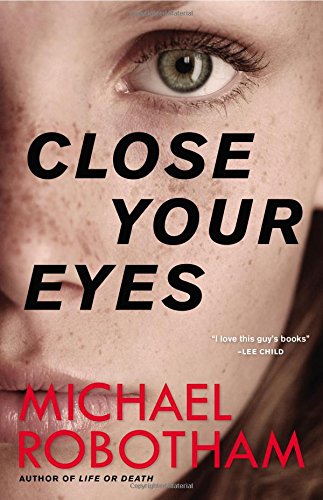 “Such complex characterizations are a hallmark of Robotham’s work, and it is a gift some of his peers in the suspense genre might wish they could equal.”

Clinical psychologist Joe O’Loughlin returns in a page-turning thriller that will keep his fans up late as they follow his investigation into the twisted mind of a serial killer.

In what is arguably Michael Robotham’s most complex novel of this series, Joe O’Loughlin struggles with the increasingly debilitating effects of his Parkinson’s disease, while he faces a possible family tragedy that may alter his life forever. The very last thing he wants or needs is being coerced into another criminal investigation.

What Joe wants is to reconcile with wife Julianne after their six years’ separation, although the separation has been a friendly one, with Julianne apparently forgiving Joe’s one-time act of adultery. “Almost ten years ago, on the day I was diagnosed with Parkinson’s disease . . . I slept with a woman who wasn’t my wife. It was a stupid, stupid, stupid mistake that I have tried to rationalize ever since, but my excuses don’t measure up to the damage I caused.”

Joe is surprised when Julianne invites him to spend the summer with her and their two daughters, Charlie and Emma. Is this Julianne’s way of offering reconciliation even though she warns him against reading too much into the invitation? “She has thrown me a lifeline. I should grab it with both hands, but I’m not sure if the lifeline is tied on to anything.”

Joe accepts Julianne’s invitation, hoping for a happy ending, but willing to take whatever kind of relationship his estranged wife offers. The one thing that will endanger that happy ending is if he becomes involved in a criminal investigation of any kind, much less a double murder. Joe’s past involvement in profiling criminals for the police led to the kidnapping of his older daughter Charlie. Joe fears that Julianne will withdraw her invitation to him rather than risk that their daughters might become targets again if he works for the police.

With Julianne’s likely reaction in mind Joe turns down Deputy Chief Superintendent’s Ronnie Cray’s plea for his help in profiling a murderer. A mother and teenage daughter have been murdered, but the mother is repeatedly stabbed in a frenzied attack, while the daughter is strangled and poised like an innocent Sleeping Beauty in her bed. The different methods of murder present an interesting case that engages Joe’s curiosity, but he wants nothing to do with it. Absolutely. Positively. Nothing will entice him to change his mind.

Joe might have stuck with his emphatic refusal if DCS Cray had not “dangled the bait and sank the hook, reeling me in like a fat trout.” Cray reveals that the psychologist the police hired had announced details of the crime during TV interviews. Calling himself “the Mindhunter,” Emilio Coleman uses Joe as a reference, claiming Joe taught him all he knew.

There is nothing Joe hates more than someone using his name. “I hate psychologists who strut around crime scenes and pontificate on TV shows, profiting from other people’s misery.” Joe agrees to look at the crime scenes, to review the case notes and witness statements, and try to discover what the police may have missed. That’s all the involvement he plans, and even that upsets Julianne, although for some reason he cannot discern, she doesn’t ask him to leave.

Joe discovers several other cases that are linked to his double murders by the letter A carved in the victims’ foreheads. Some of the victims escaped, others were killed. All but one of the survivors confess to having committed adultery, confessions that remind Joe of his own transgression.

Joe begins searching for a link between the victims: How did the murderer find these women? And why did he leave some alive, but kill others? To add to Joe’s stress is his increasing certainty that Julianna has a secret she not sharing, and his horror when his daughter, Charlie, tells him she is planning to study forensic psychology at university. Hoping to discourage her Joe takes her with him as he continues his investigation. If Charlie sees how horrible murder is, if she sees what cost a profiler pays in mental anguish, surely she will change her mind.

Charlie provides new insight into the case, but her enthusiasm puts her life at risk, the very thing Joe tries to avoid. In a harrowing ending that will leave his fans breathless, Robotham blends Joe’s fear for his daughter with an unexpected crisis involving Julianne.

Intermittent chapters from the murderer’s point of view provide a glimpse into the evolution of a serial killer that underscores the part physical and mental abuse play in warping children’s developing minds. Robotham is able to create a serial killer who, while not sympathetic, at least possesses enough human characteristics in common with most of us to leave us uncomfortable. Such complex characterizations are a hallmark of Robotham’s work, and it is a gift some of his peers in the suspense genre might wish they could equal.

While not flawless, Close Your Eyes is as near to it as one could wish, and on a scale of one to ten, ranks at least a nine.