The Clockwork Universe: Isaac Newton, the Royal Society, and the Birth of the Modern World 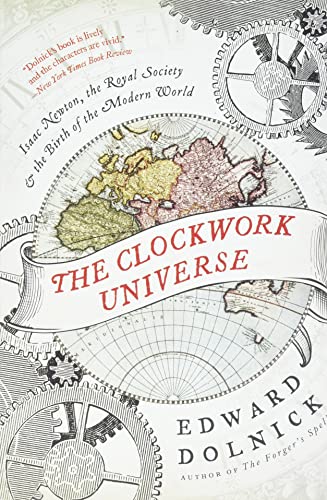 Europe in the year 1660 was an environment of interesting mixed historical contradictions. This ambiguity existed because the physical and sociological contexts within the late 17th century (London, especially) were not clear-cut or neatly narrative.

The year 1660 was a historical moment that saw the death of the medieval worldview and the beginning of the truly modern world. However complex the circumstances for the business of doing science, the stories of Kepler, Galileo, Newton, Leibniz, Hooke, and the Royal Society practically demand interest for modern audiences. The motif of a lone or maligned scientific genius is a theme that quickly and easily resonates within the early 21st century.

According to Edward Dolnick, the latter half of the 17th century intelligentsia was comprised of these “lone geniuses” who banded together to form a society that championed the view that, through work, thought, and effort, the universe was knowable and the mind was rational.

Scientists, mathematicians, astronomers, and writers sought to explain the world as a perfectly mechanistic and operable machine. Scientists, mathematicians, astronomers, and writers viewed their life’s work to be uncovering the secrets of that machine and writing down those secrets as a way of paying homage to a Creator’s greatness. (And, arguably, to their own egos.)

The Clockwork Universe: Isaac Newton, the Royal Society, and the Birth of the Modern World describes a world that is still approaching what we would term modern. It serves as a reminder to modern audiences that at the beginning of the Royal Society’s era, the cause of disease and the effects of medicine were humorously correlated at best and horrifying at worst; astrology was just as legitimate a “science” as astronomy and physics; and literary greats wove the natural and the supernatural seamlessly together. In the tempestuous tumult of the latter part of the 17th century, Caliban, Ariel, and Lear all offer the reader insight into the contradictions and socio-political forces at work within the broader cultural milieu—the explanatory systems, in other words, that had legitimate and significant pull for the intelligentsia of the day.

In The Clockwork Universe, Mr. Dolnick draws on bottomless interest in the stories, types, and heroes of the early members of the British Royal Society; easily, the stuff of legends within the history of science.

With the recent 400th anniversary of Galileo’s publication of the Starry Messenger, it seems apropos to trot out some tried and true classics within the history of science and present them with real modernist punch and pizzazz. Mr. Dolnick presents the stories in a way that forces a modern audience sit up and take notice of the stories themselves.

The Clockwork Universe reads much like a litany of classic stories of classic characters. The reader gets caught up in the next vignette or character sketch that Mr. Dolnick tells with unexpected twists and clarifications. He brings up some of The Classics; for example, the original telling of Newton’s apple tree story, but gives the perspective of Newton’s own telling of the story. Interestingly, Mr. Dolnick opts not to weave the sketches into any type of larger narrative. The reader isn’t sure what story Mr. Dolnick is trying to tell. Newton’s? The rivalry between Newton and Leibnitz over the creation of infinitesimal calculus? The creation of the British Royal Society? Hooke’s bitterness and jealously toward Newton’s success? The tumultuous, disease-ridden slums of London as a contextual backdrop for these stories?

However, this begs a question of style. If the reader is looking for a serious scholarly treatment of questions that surround the sociology and history of science, The Clockwork Universe isn’t the right fit. The string of character aposiopeses are interesting tidbits that whet the imagination of readers already somewhat familiar with the characters and stories.

For example, most readers will be familiar with Newton’s work with prisms and light. What they might not be familiar with, however, is Newton’s experiment to attempt to understand light within the human eye—to which he placed “a bodkin betwixt [his] eye and bone” to discover the workings of the eye itself. This story is related to the reader, complete with fantastic illustrations. The reader is left wanting the next story, but doesn’t have a larger context or narrative within which to slot it. It is a reminder that every book need not be a master meta-narrative.

The Clockwork Universe: Isaac Newton, the Royal Society, and the Birth of the Modern World is a tidbit-filled read, quick to leave the reader with stories just wanting to be worked into conversation:

“Speaking of [anything], did you know that Leibnitz often wrote during his bumpy carriage rides? Today, his Collected Works has over a hundred thousand manuscript pages?”

Mr. Dolnick’s colloquial turns of phrase easily reel the reader into the late 17th century and the emerging modern world.