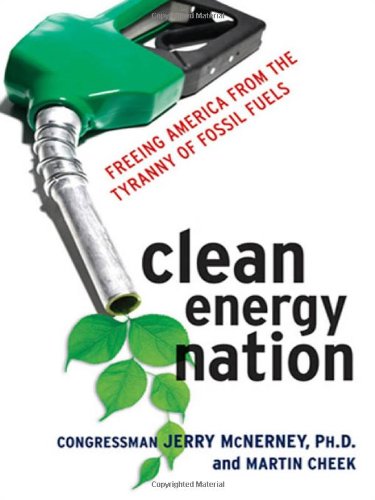 “. . . one of the truly impressive things about this book is its scope. . . . Despite being dense with data and statistics, Clean Energy Nation never becomes overly technical. Although it conveys a tremendous amount of information. it remains very readable and a useful introduction to anyone with an interest in the future of energy.”

Today fossil fuel resources are so abundant that it is easy to forget that our economy, indeed our very civilization, is completely dependent on them. We are all aware that we burn them for transportation, electrical generation, and heating, but we tend to be less aware that they also power the pumps that carry fresh water to the kitchen taps and drive the waste water processing machinery that disposes of it afterward.

According to the authors of Clean Energy Nation, agriculture is a major fossil fuel consumer; in fact it accounts for 17% of U.S. annual fossil fuel consumption. Fossil fuels make it possible for an ever-shrinking agricultural workforce to feed an ever-growing population. They drive the machinery used to plant and harvest crops. They power the locomotives and transport trucks that convey them to the local grocery store, and they’re also used to produce the fertilizers, herbicides, and pesticides vital to maintaining the high crop yields of modern farming.

Fossil fuels are vital, too, for our national defense. The U.S. military burns up about 130 million barrels of oil each year,. Yet the United States doesn’t produce nearly enough oil to meet its needs. Most of the oil we use comes from abroad.

By 2025, the authors estimate, 70% of the oil burned in the U.S. will come from abroad, much of from politically volatile or even unfriendly regimes. By becoming dependent on foreign oil, the United States has put its economy, even its ability to wage war, in jeopardy. A few of us can still recall the OPEC oil embargo of 1973 and the long lines at gas stations.

Fossil fuels impact our lives thousands of times every day, in ways most of us are barely aware of. In Clean Energy Nation, however, the authors remind us of the scope of this impact. They trace the history of our growing addiction to fossil fuels and, more importantly, suggest the steps needed to insure a future of U.S. energy independence.

PEAK OIL AND AFTER
By even the most wildly optimistic estimates of petroleum reserves, sometime in this century we will begin to run out of oil. The point where oil production reaches its maximum and begins a slow, steady decline is known as “Peak Oil,” a term popularized by the work of geophysicist Marion King Hubbert. Using mathematical calculations Hubbert predicted in a 1956 paper that U.S. domestic oil production in the lower 48 states would begin to decline by the early 1970s. A prediction that proved to be right on the money.

Predicting world old peak production is much more difficult, but that peak, too, will arrive one day, probably very soon. The thing about peak oil is, we probably won’t even become aware we’ve passed until a year or two afterward.

At the same time, world demand for oil has been increasing dramatically. By 2050, according to the authors, China may well be importing more oil than the United States. As the supply shrinks, competition for remaining oil reserves will certainly intensify.

Attempts will be made to reach oil in more difficult to reach deposits, increasing risks to humans as well sensitive environments in greater risk of suffering disasters similar to Deepwater Horizon disaster and the Exxon Valdez. In the end, lack of oil will transform the world as profoundly as its ready availability.

Coal reserves will take longer to exhaust, but one day, they too will be gone. Nuclear power may appear to offer a solid alternative, but it, too, is very much dependent on a finite resource: uranium ore. The more pessimistic estimates predict there might not be enough high quality uranium left to last out the century. And nuclear energy has environmental problems of its own, from the environmental damage attributed to uranium mining to unresolved problem of what to do with nuclear waste. In the wake of the disaster at Japan’s Fukushima power plant enthusiasm for nuclear power has dropped significantly. As a direct result, Germany announced plans to phase out all of its nuclear power plants by 2022.

In not quite three centuries we will have burned through a treasure house of energy resources stored up over millions of years. The question remains: what do we do then?

This is the question the authors of Clean Energy Nation try to answer. But replacing fossil fuels is not that easy. For one thing fossil fuels are energy dense, which means that any alternative fuel is likely to be less efficient and more costly and some can come with negative environmental consequences of their own.

Still, if we are to maintain our present quality of life, alternative energy sources must be found. Nations that lead the way into new energy future stand the best chance of thriving economically in the post-fossil-fuel future, and the authors very clearly want the United States to take a leading role in that future.

They obviously feel a sense of urgency that evident in passages that may leave a reader with the impression that he or she is on the receiving end of a political speech.

Those brief passages aside, the authors have packed their book with valuable information, most especially a survey of some of the more promising clean energy technologies under development. Some of these may never be improved to the point of practicality. Others await a critical technology to nudge into the mainstream of the energy race. The best solution may involve many of these technologies.

As authors McNerney and Cheek point out, “America . . . must not look for a single ‘silver bullet’ solution. We must instead consider the whole package of sustainable energy sources and develop a sound national energy policy that takes advantage of all our potential clean power and fuel supplies . . .”

ENERGY AND POLITICS
Among those challenges is the fossil fuel industry itself. According to the authors the oil and natural gas industries have taken steps to preserve their position by making effective use of their close ties to government.

Authors McNerney and Cheek reveal the underside of energy politics in which oil and natural gas companies insure their interests are protected by lavish political contributions and hundreds of millions of dollars in lobbying efforts.

Energy has always been a political issue in the United States, and it is becoming more so every day. Alternative fuel initiatives of the Jimmy Carter presidency (in response to the 1973 OPEC oil embargo) were neutralized as much by the policies of the Regan administration as they were by the return of cheap oil.

What the authors argue for is a long-term national energy policy that transcends the ebb and flow of politics, a policy committed to the development of alternative energy sources.

Whether or not you believe the cause is linked to greenhouse gas emissions, we have pretty firm evidence that climate change is underway. The polar ice caps are melting. By 2030, the dream of a Northwest Passage may become a reality. Already several nations have sent their naval expeditions sailing northward to help secure their claims to potential new routes.

The effects of pouring millions of gallons of fresh water from newly melted ice into the world’s oceans is less clear, but may have equally dramatic consequences. Indeed, predicting the future of complex systems like the ecology of planet Earth is close to impossible.

But if your object is to convince readers of the need to take action, you may be forgiven if you trot out a few of the direst predictions. These are ready to hand in the popular press and reports prepared by environmental watchdog groups, though less so in peer-reviewed scientific journals, as the Intergovernmental Panel on Climate Change (IPCC) found to its cost.

The authors summon up a few worst-case scenarios, because their greatest fear is that the United States will do nothing and thereby fail to secure a leading place in the race to develop new clean energy technologies.

Making the transition to clean energy will be expensive, but more than money it will require brain power. The authors have foreseen this, which is why they devote a chapter to the need to improve education in the United States.

They warn that unless steps are taken to improve math and science education, the U.S. will be forded to sit by as other nations spring into the lead and reap the economic benefits of technological leadership in developing clean energy technologies.

The inclusion of education shouldn’t really surprise us because one of the truly impressive things about this book is its scope. We are given everything from a history of fossil fuels development to the environmental impact of our growing addiction to them. It moves on to a wide-ranging review of some of the most promising alternative technologies and the some of barriers they face to further development. Despite being dense with data and statistics Clean Energy Nation never becomes overly technical.

Although it conveys a tremendous amount of information. it remains very readable and a useful introduction to anyone with an interest in the future of energy.