Claws of the Cat 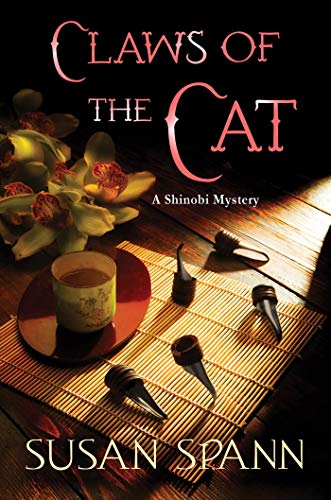 “. . . an intriguing tale with dramatic descriptions and vivid characterizations . . .”

Claws of the Cat is an excursion into 16th century Japan where exotic locales take on a familiar flavor as a samurai investigates a murder in order to protect the Portuguese priest placed in his charge.

It’s the spring of 1563. For two years, Jesuit Father Mateo Avila de Santos has been “. . . granted permission by Shogun Ashikaga to reside in Kyoto and teach religion to all who wish to accept it.”

Mateo is treated relatively well by everyone in spite of being a foreign “ghost,” because “Shinto acknowledges a multitude of divinities . . . They considered the Christian God no threat.”

Matsui Hiro is thought to be a ronin, a samurai without a master. In actuality he’s a shinobi, a member of the warrior caste appointed the priest’s bodyguard. Hiro prefers to let people think he’s something he’s not, calling himself Father Mateo’s translator and scribe.

“A shinobi’s first and greatest defense was misdirection.”

Soon Hiro will need all the misdirection he can get.

At the Sakura Teahouse, Akechi Hideyoshi, a minor noble, is killed in a particularly brutal manner.

Protesting her innocence, the accused, the teahouse entertainer with whom he spent the night, asks for Father Mateo. The victim’s son, a police yoriki, is prepared to dispense justice by killing the girl on the spot.

“We have to do something,” Father Mateo said in Portuguese.
“It is the law, “ Hiro replied. “He has the right to avenge his father.”
“She didn’t kill his father,” the priest protested. “Her death accomplishes no justice.”

Father Mateo defends Sayuri against young Nobuhide, and abruptly finds himself condemned along with her. Using a little verbal fanciwork, Hiro manages to get a reprieve of two days for both the priest and the accused but Nobuhide gives him an ultimatum:

“. . . if you prove Sayuri’s innocence by noon two days from now, I will execute the killer and set her free. But if you fail, I will kill both.”

More is at stake than the priest’s life or the girl’s, however. If Hiro allows Father Mateo to come to harm, he’ll also die.

“If you die, it means my head.”
“Shogun Ashikaga will understand that I acted on my conscience. I’ll write a letter saying you were not to blame.”
“You overestimate samurai understanding,” Hiro said. “The Iga ryu sent me here, not the shogun, and Iga does not forgive failure.”

On the surface, it appears no one has a reason to want Hideyoshi dead. Hiro’s investigations soon reveal there are quite a few people who’d like to murder the victim. . . .

His brother wants to marry Sayuri and had been buying out her contract at the teahouse. Hideyoshi also wanted Sayuri, and because of that, the arrangement with his brother was cancelled.

There’s a daughter wishing to becoming a kunoichi, a female samurai, and the young magistrate himself. Hiro also discovers Akechi owned the weapon which was used to kill him, a set of neko-te, cat’s claws, placed on the hands and used to stab and rip.

In addition, there’s political intrigue in the form of Hideyoshi’s cousin, Mitsuhide, who has defected to a rival warlord’s domain and may be involved in buying Portuguese firearms to take to his new master. Mitsuhide is currently condemned to die if he returns to Kyoto.

Could it be the Shogun himself had Hideyoshi killed, including him in his cousin’s death sentence?

Warlord Oda may also be a suspect.

“. . . Lord Oda has told the Portuguese Kyoto is not safe…He has promised safety for every trader who locates his warehouse in his capitol . . . if the priest dies . . .”
“Oda will have all the warehouses and all the firearms he needs,” Hiro said.
Kazu shook his head. “Worse than that. Oda will march on Kyoto and the Portuguese will help him take it.”

With only hours to spare, Hiro believes he knows the killer, but can he prove it before both Sayuri and Father Mateo forfeit their lives?

Any story set in a foreign locale appears exotic; a murder in such a place is even more so. Adding to the intensity of Hiro’s race against time in ferreting out the facts of the case, the Japanese mores and customs in general, and those of the samurai in particular serve to heighten the drama.

Author Spann has penned a story set in a time of which many Caucasians are ignorant. It’s an intriguing tale with dramatic descriptions and vivid characterizations, revealing that love, jealousy, and greed not only are universal emotions, but also remain unchanged by the centuries