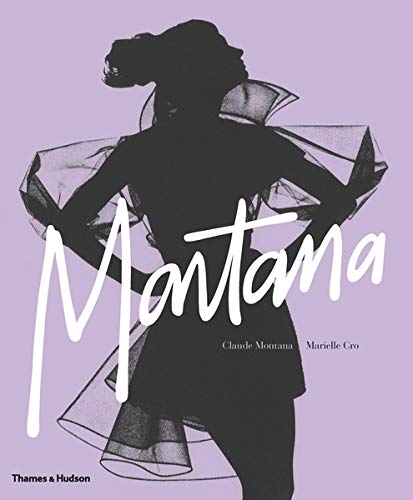 It odd when the subject of the “biography” or paean is a co-author of his own book, but it becomes even stranger when this person never speaks in the first person.

Claude Montana: Fashion Radical provides stunning visuals which are accompanied by repetitive copy (sleeves) and arcane terms (paletot) when one would have been much more interested in hearing what the designer had to say rather than just the opinions of others.

Ms. Cro would have done all of us great justice if she had allowed or pressured Mr. Montana to speak for himself and also given a voice to the many models they so readily identified in the book. Many names are dropped, and yet so many other, relevant names are omitted in describing the talents of this designer.

Mr. Montana can be compared to very few in the business of fashion, and yet we are lead to believe that he stood alone as “créateur.” Mr. Montana could have been compared to another great architect of fashion, Gianfranco Ferre, and yet Mr. Ferre is never mentioned—nor for that matter are hardly any other influential designers. Other designers are mentioned, but only one of whom might be considered world class—Azzedine Alaia—and even then there is no comparison drawn when there is the mostly likely of eroticism and sex. Both men were provocateurs and both men are masters of the “cut.”

Claude Montana, without a doubt, helped to shape fashion of the 1980s with a singular vision of how he thought women and men should dress. He created a vocabulary for his brand that included not only design but also fabrication, a color palette, and his great dedication to fashion as an art form and not only as commerce. He intrinsically knew how to deal with the “petit mains” of the couture ateliers at Lanvin, yet he was astounded that no one ever said “not possible!” He elevated himself, as a designer when he took the reins of Lanvin couture without realizing that he had also raised the bar for the art of the haute couture in Paris.

All this aside, the photos are dazzling, but the writing leaves something to be desired; however, the reason anyone buys this book is to see the fashion, to see Montana’s body of work, which is so very richly represented.

Unfortunately, one is unable to glean any insight into the man as designer nor even the man as a human being. Mr. Montana has been off the radar for almost 20 years now, and yet there is no mention of what the great designer does in the new millennium or what he has done to fill the time between his last collections until present time.

Too bad that no one suggested a more authoritative look into the designer and his life while the designer can still speak for himself. Mr. Montana has always been notoriously shy, but his voice would have made more impact than just the voices of photographers and those who helped accomplish the visual persona of his brand.