Classics Illustrated Deluxe #10: The Murders in the Rue Morgue 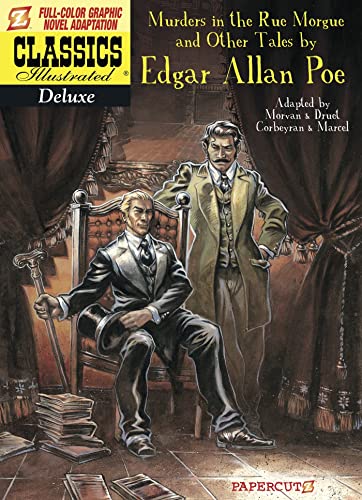 There is a hypnotic beauty to be found in this new adaptation of some of Edgar Allan Poe’s most imaginative works.

The Murders in the Rue Morgue set the stage for everything from Sherlock Holmes to Hercule Poirot. Without Mr. Poe’s seminal short story the writings of Dashiell Hammett, Raymond Chandler, Ellery Queen, and many others would look vastly different. Modern cinema would be missing Chinatown, TV would have no Monk or House and even Batman might not have taken up a cape and cowl in the manner we know.

First published in 1841, the story is one of the most fascinating in American Literature. The murders are horrible, the identity of the killer is a shock, and above all how the crime is solved is a revelation. The story is truly revolutionary.

From the grisly murder of the two victims to the casual brilliance of the thinker C. Auguste Dupin, Mr. Poe set the stage for every detective novel, movie, and TV show that followed in his wake.

Over the course of the story the Frenchman M. Dupin takes apart the crime scene piece by piece. We watch and listen in wonder as he uses logic and reasoning to tear apart all other theories and rebuild them into the correct answer. His extraordinary imagination allows him to see the answer that others haven’t yet reached. The new Classics Illustrated Deluxe adaptation of The Murders in the Rue Morgue (and other tales by Edgar Allan Poe) fully captures the brilliance at the heart of Mr. Poe’s tale.

While a strict adherence to Mr. Poe’s narrative would be difficult in the highly visual medium of graphic novel, the two Frenchmen fully capture the many moods to be found across the work.

Instead of opening as the author originally did by stating the delight of the analytical, they pull the reader in without using a word.

The tale opens across three silent pages. The first panel is just red. The second shows what appears to be a knife or possibly a razor slip across an unidentified image. The third panel confirms that this is a person. In the fourth we see a woman lying flat as the blood slips in around her head and across the stone. At the end of the page she lies on the cobblestone street amid an empty courtyard.

From there the art of M. Druet takes us on a small walking journey from that bloody courtyard into a house. He guides us as we walk up a staircase until we finally enter a room where we see a touch of blood on the floor. The ultimate reveal of the second victim is shocking, not for the horror of the image but for the absurdity of the situation.

As we turn the page we are suddenly atop a hill looking down at the comforting image of a spring day in France. The beauty of what M. Druet then shows us brings the world of 1840s France to a bright and detailed life.

As we glide into the city we see a flower girl at the corner of a curved and slightly unbalanced street. The corner of the building holding a bookstore looks a touch crooked as the support mortar seems out of kilter with everything else. A close up of that bookstore’s window gives a sense of musty timelessness to the interior of the place.

Once inside we find that two men unknown to each other are searching for the same book. As the dialogue begins M. Morvan matches the pace of the art as he slowly reveals who we are meeting inside the book store. We see a new friendship build and as the narrator finds out more about his new friend C. Auguste Dupin, so do we.

The story builds from speculation on the part of the police to facts as revealed through the deductions of M. Dupin. Once he has told us how he solved the crime you can’t help but be amazed at what is revealed.

M. Dupin makes a second appearance in another story included in this collection. The Mystery of Marie Roget is considered to be the sequel to The Murders in the Rue Morgue.

Rounding out the set is another Poe classic The Gold Bug. Adapted by Corberyan with art by Paul Marcel the work is among Mr. Poe’s best. M. Marcel’s art brings a dream-like state to this tale through his use of shadows, alternating dark and bright colors as well as his imaginative choices of perspective.

As to their ability to thrill the reader, not one of these three tales has lost a step over the last 170+ years. As a graphic novel, this new collection under the banner of Classics Illustrated Deluxe is the perfect read for the upcoming Halloween season.

Or for the metal head or Goth kid living downstairs.