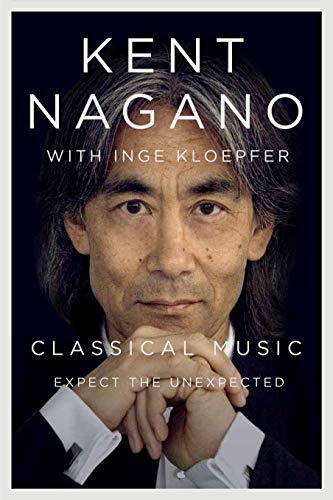 “in part a work of advocacy for classical music, in part philosophy for a society in transition, and in part wisdom from a sensitive, caring, and intelligent artist, Classical Music: Expect the Unexpected is a volume filled with love and depth.”

If you are looking for a thoughtful, reflective, and interesting book on the present, past, and future of classical music in North America, Kent Nagano’s Classical Music: Expect the Unexpected is a sure-fire winner. Filled with fascinating stories of the maestro’s experiences within this often-misunderstood world, the book is an ode to the importance of the arts, and more specifically music, within our fast-paced, technologically imbued society. The result is a fascinating, thought-provoking read.

Originally published in 2014 in German, this new English translation has fittingly been released to coincide with the announcement of Maestro Nagano’s final concert season as conductor of the Orchestre Symphonique de Montréal.

Within the prologue, written especially for this new edition, Nagano outlines why he has written such a book at this point in his life. He states that classical music:

“is an adventure we embark upon once we are willing to engage with it. Classical music transports us to another world. There it unfolds its tremendous power. And because of this power it can enrich us immensely, especially today in these troubled, accelerating times.”

The book is divided into six chapters that are each easily read within one sitting. Within a chapter, the first half consists of an essay on a music related topic. Nagano then proceeds to illustrate and expound upon his essay through an in-depth exposé of a classical composer including J. S. Bach, Schoenberg, Beethoven, Messiaen, Bruckner, Bernstein, and Ives.

Briefly, the chapters are as follows:

Chapter One: On Cattle Breeders and Trumpets

An insightful outline of Nagano’s music-filled upbringing in rural California and the effect of an exemplary elementary music teacher upon this community.

A fascinating history of the decline and aging of North American symphony orchestra audiences.

Chapter Three: Classical Music for a Time of Crisis

Chapter Five: Nothing but Music in One’s Head

Interviews with researchers (e.g. Daniel Levitin, David Huron) who outline current theories of cognitive science in an attempt to understand “how” and “why” music is so powerful an aesthetic experience.

There are so many beautifully crafted portions throughout this book that one is often tempted to pause, reflect, and then reread. For example, Nagano’s account of his musical upbringing is insightful and charming. So, too, are his description of the importance of music teachers upon society and his call for increased emphasis upon the humanities in education.

Perhaps the most enchanting sections of the book are when Maestro Nagano takes on the role of storyteller, revisiting conversations and events from throughout his career. His encounters with Frank Zappa, his visits with Leonard Bernstein, and his lessons with Olivier Messiaen are recounted with such intimate detail that readers feel as if they are sitting on a nearby piano bench or standing alongside the maestro on the podium.

However, there are points where readers might question some of Maestro Nagano’s ideals or philosophy. For example, Nagano purports that one of classical music’s unique characteristics is its capacity to “foster social cohesion and enhance our quality of life.” Cannot other forms of music, such as jazz, traditional, or gospel music perform this same function equally as well? Cannot other arts such as dance or drama also fall into this same category? Could one reread the book, substituting “classical music” with other art forms and musical styles and still have Nagano’s ideals and philosophy hold true?

Nonetheless, in part a work of advocacy for classical music, in part philosophy for a society in transition, and in part wisdom from a sensitive, caring, and intelligent artist, Classical Music: Expect the Unexpected is a volume filled with love and depth.

The book is a lament, a ballad, a tone poem, a symphony as to the power of classical music. And, as so beautifully stated by the author, this power can and should have an important place in our lives, especially in these times of societal turmoil and upheaval.

Dr. Lisa Lorenzino serves as the Chair of the Music Education Department at the Schulich School of Music. A jazz flutist, she heads Lisa Lorenzino and Friends alongside Josh Rager (piano) and Mike de Masi (bass). In addition, she is a member of Compás y Melodía, a classical Spanish flamenco ensemble featuring dancer Lina Moras and Patuá, a Brazilian samba band. She is also the founder of Montreal Jazz Flute Summit, a jazz ensemble of four flutes, bass, and piano featuring Dave Gossage, Frank Lozano, and Jennifer Bell.