Classical Crossroads: The Path Forward for Music in the 21st Century 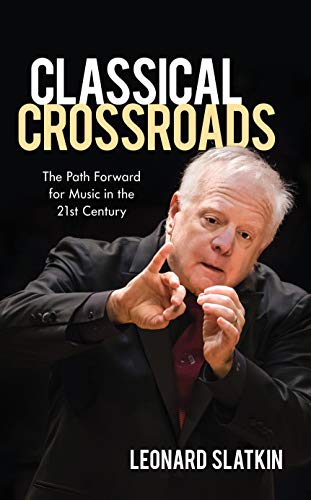 How does a composer suspend time? A fermata—a dot underneath a semi-circle—tells the musician that a note should be prolonged beyond its normal duration. Leonard Slatkin reminds us: “Corona, another name for a fermata, put a real hold on everything imaginable.”

On page one of his new book, Classical Crossroads, Slatkin records Covid-19’s effect on live music: “Changes are inevitable, and those that took place over this time in the classical music workplace were extraordinary.”

With concert halls shuttered and ghost lights presiding over empty stages, reflection upon the state of classical music was inevitable. Slatkin’s book will prove an important contemporaneous record of the pandemic, as much of it is devoted to his blog posts written during the pandemic.

Through the summer and fall of 2020, he questioned how and when live music might return given that many features of live orchestral concerts were impossible. In fact, the list of traits that make live music enjoyable and possible is the same list of pandemic impossibilities: large crowds; musicians packed closely enough to hear one another; winds, brass, and singers blowing vast quantities of air; the necessity of national and international travel for conductors and soloists.

His focus for the rest of the book rests largely behind the curtain. To the audience, the conductor is a man (although, as Slatkin points out, more females are entering the ranks) who stands on a box and waves a stick at his charges. Dressed in black, he traces mysterious, inexplicable patterns in the air. Slatkin demystifies the conductor’s duties, starting with the differences between the role of guest conductor and music director. All conductors are re-creators, there to make fundamental choices about tempi, balance, and sound concepts in order to reproduce the intentions of the composer, but the role of the music director is more involved.

“A music director,” Slatkin writes, “is part politician, diplomat, parent, psychiatrist, cheerleader, and team player.” The music director is responsible for guiding the orchestra’s repertoire choices; he’s involved in hiring and firing orchestra personnel and in fundraising. As the literal face of the orchestra, the music director acts as parent, whereas the guest conductor, coming in for a week of concerts, functions more as nanny.

At times, Slatkin appears to address orchestra musicians themselves, rather than audiences, with calls for audition reform. He suggests removing the screen—thereby ending blind auditions—beginning in the semi-final round. One of his arguments against the screen is “the right of a candidate to see the space into which he or she will play.” He continues, “I actually find that this is one of the most compelling arguments against the screen.” Many orchestras, however, already address this issue by putting the screen in front of the jury instead of the performer. The person auditioning sees, and plays into, the concert hall.

He also suggests ending blind auditions as a way to increase representation of underserved community members. The problem with his suggestion is that it comes with the risk of undermining exactly what a screen was intended to prevent: conscious and unconscious biases.

Slatkin writes: “It is my belief that very few women would be discriminated against on the basis of their gender in the orchestra hiring process today, with judging based on how musicians play, not how they appear. In a way, the screen now represents a bit of an insult to those who are making the decision as to who will join the orchestra. Do we really believe that musicians of today cannot come to a fair conclusion irrespective of the candidate’s gender and race?”

Leaving aside the fact that unconscious biases skirt our best attempts to eliminate them, there is also the issue that orchestral musicians inhabit an insular world. It is difficult to leave aside biases when judging friends, colleagues, siblings, and students who studied with the same teacher. Musicians can make these hiring decisions based only upon sound, and they must be given every tool at their disposal to listen fairly to each candidate. Slatkin himself seems to endorse the idea that we only need to listen. He writes: “One of the things that makes the world of the concert hall so special is that it offers an abstract experience. Everyone can create their own images as they listen. It is our job to show them how.” Blind auditions are not a perfect system. Using Churchillian reasoning, they might even be the worst system—except for all others.

The best idea to come from Slatkin’s Covid reflection period is his suggestion that music directors forego some of their guest conducting and spend more time in their own community. “What better way to establish ties to the community than to spend a lot of time in it?” he writes. “This is what the old-time maestros did. There is no reason that it cannot happen again, this time with a truly cooperative spirit.”