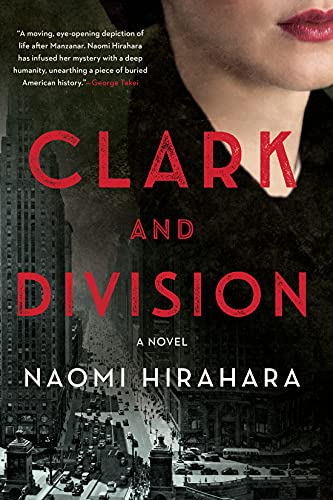 “Hirahara’s careful plotting and easy style help to create vibrant characters and a vivid picture of life for Japanese-Americans at a particularly difficult time.”

In Clark and Division, Naomi Hirahara has managed to combine social history and a detective story in a totally absorbing way.

The corner of Clark and Division in Chicago, a few blocks from where I am writing this review, is now in the midst of an upscale urban neighborhood. The only historic landmark at that intersection is the old Mark Twain hotel, which has been converted into modern apartments. In 1944, the year in which Naomi Hirahara’s Clark and Division takes place, the Mark Twain Hotel is the only classy establishment in an area filled with sleazy nightclubs where illegal prostitution and gambling fill back rooms. It is also a mixed neighborhood where many Japanese immigrants (Isei) and their American-born children (Nisei), found cheap housing after they were allowed to move from internment camps. Down flights of stairs, then as now, is the Red Line station. In the novel, the station is the scene of a tragedy that leads our young heroine, Aki Ito, on an obsessive quest to learn what exactly happened on that subway platform. Aki is both narrator and central character.

Aki Ito’s older sister Rose preceded Aki and their parents to Chicago. Upon their arrival, the family discovers that Rose fell in front of a train as it rushed into the Clark and Division station. Convinced that Rose’s death was neither an accident nor suicide, Aki becomes a relentless detective.

Aki and Rose’s story is grippingly told. Hirahara is a veteran, award-winning mystery writer who knows how to weave a complicated, convincing plot. However, the primary fascination of the novel is its detailed picture of what life was like for the Japanese who had been torn away from their homes and jobs, forced into detention camps, and, after being relocated in a big city, had to find ways to carry on. Although Aki finds a job at the prestigious Newberry Library, her parents can only find low-paying menial jobs. Aki befriends a number of Nisei who have had varying degrees of success at surviving economically and spiritually. They dance on weekends at the Avalon Ballroom and socialize at each other’s homes.

As she searches for the truth about her sister’s death, Aki encounters young men who find various ways to deal with their life in a racially segregated city, from Zoot-suited rebels to men devoted to the well-being of their families. Nonetheless, Clark and Division keeps its focus on a young woman who is determined to make a good life for herself in Chicago. Although Aki meets a fine young Nisei who falls in love with her, she wants a career for herself. Once she understands what happened to her sister, she turns her energy on working toward a fulfilling future, which may not involve marriage, the primary goal for many girls her age. Aki is a proto-feminist in an age when women were supposed to adapt gracefully to subordinate roles at home and at work.

Hirahara’s careful plotting and easy style help to create vibrant characters and a vivid picture of life for Japanese-Americans at a particularly difficult time.