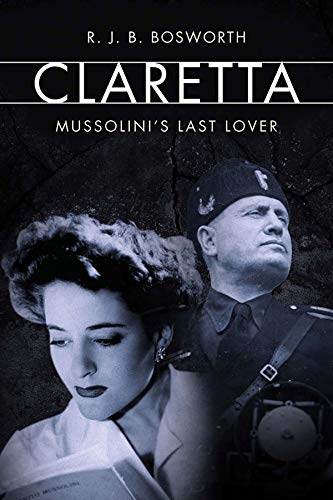 Claretta Pitacci, although not the only mistress to Italian Prime Minister and dictator, Benito Mussolini, is possibly best known as the one who died with him.

In his book Claretta: Mussolini’s Last Lover R. J. B. Bosworth relies in large part upon Claretta’s extensive diaries and journals to ferret out the details of the often-contentious relationship between these two people.

Throughout the book, Bosworth reflects primarily on Mussolini as a man whose sexual needs and desires don’t ever seem to be fully met. Although legitimately married with five children, his extramarital affairs also produced illegitimate offspring with numerous women. Bosworth points out that most of Mussolini’s partners “sprang from a more elevated background than his own . . .” Claretta, however, was “genteely reared Catholic . . . of the Roman bourgeoisie.”

In the first two chapters of Claretta, Bosworth provides much detail on the many other lovers who fell under Mussolini’s spell. Bosworth explains the necessity of this detail as “full comprehension of their affair . . . demands knowledge of the dictator’s other dealings with women and a portrayal of how Mussolini behaved sexually during his socialist youth, his Fascist rise to power and once installed as dictator.”

While these chapters may take away from the main character of the book, their necessity becomes obvious as the story unfolds to reflect upon the many jealous tirades cast forth by Claretta each time “Ben” returns to any one of these other women.

The depth of Claretta’s character is also developed through the information Bosworth trolled about her family. This is as much a story of Claretta’s social-climbing and demanding family as it is the story of her relationship with il Duce. In fact, it was this relationship that fostered those very same demands.

It is clear from the information Bosworth obtained from her diaries, that Claretta pursued Mussolini through an “artless siege.” But as disasters of the Fascist war effort increased, public attention to the affair also increased, and it became apparent that the relationship with Claretta was more serious than those of his previous liaisons. His “sexual obsession with Claretta was an ever-greater factor in the decay of the dictator’s image and in public rejection of the notion that Fascism should any longer frame their identities.”

Although this is not a book about Mussolini, per se, by virtue of his political position it would be impossible to not reflect on his role in politics. “Here indeed was a national boss who did not always have government business at the top of his agenda.” The picture Bosworth paints of il Duce is one of political stupidity and arrogance. “Scathing is the word that best defines Mussolini’s estimation of his political opponents and, often enough, his partners. Here, indeed, was the dictator as misanthrope, vain, ill prepared, boastful, aggressive, yet sometimes uneasy in his ‘power.’”

Claretta doesn’t always fare much better. Her demands often paint her as a bit of a harpy, demanding a position in his life that she does not deserve. In fairness, it can be said that most of the women in his life made demands that could not and would not be met.

Bosworth relates the results of the July 24, 1943, coup against Mussolini and focuses on how Claretta (and her family) spent time in prison. Ever the journalist, Claretta detailed imagined conversations with el Duce as she expressed the trials of prison life.

The new regime lasted only 45 days, when Mussolini was “rescued by a SS glider team and delivered to a reunion with his legitimate family near Munich.” By October of that year, Mussolini was reinstated as leader, and his relationship with Claretta resumed.

By this time her role elevated from simply lover to also advisor. As described by Bosworth, “In such advice, Claretta envisaged a quadripartite alliance of herself . . . Buffarini Guidi, Mussolini and Hitler to dominate the new order. Despite her many retreats and her flaunted humility, Claretta had become a woman willing and anxious to assume a political role.”

As the war progressed to its finality, Bosworth points out that the telling of Claretta Pitacci and Benito Mussolini’s deaths comes in a variety of versions, but all having the same ending. On April 28, 1945, Claretta and Benito were executed. Their bodies were subsequently removed to Milan where they were hung, upside down, to prove to the public that they were, indeed, dead.

Bosworth concludes his story with a wide view of Claretta’s place in history. “In their multifarious, complex, and ambiguous thought and action, Claretta and the rest of her family hold a telling place in contemporary history. Their story illuminates much about what life was like in the first avowedly ‘totalitarian,’ yet decidedly Italian, dictatorship.”

Claretta: Mussolini’s Last Lover is a book that casts a new light on Mussolini as a failed leader. For readers interested in World War II and the path upon which its leaders trod, this is informative and interesting.