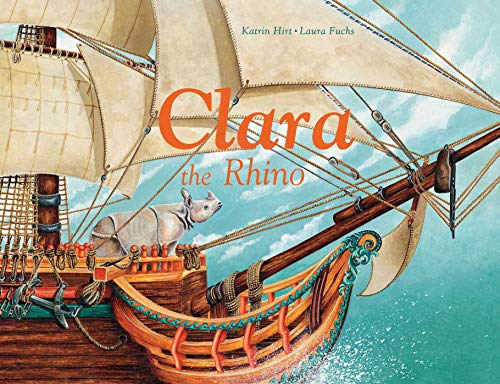 “Clara the Rhino and her tale of friendship and loyalty are sure to enchant readers of all ages, and the entire family will enjoy following Clara’s journey across the world.”

Once upon a time there was a rhino named Clara, and her true story is told with charm and simplicity in Clara the Rhino. Author Katrin Hirt takes readers on a fascinating journey. This amazing tale of friendship and affection takes place nearly 300 years ago long before television, planes, and cell phones.

The story begins in the jungles of India where a baby rhino finds herself suddenly orphaned. (Parental warning: Similar to Bambi, Clara’s mother is killed by hunters). The hunters see the baby rhino and carry her away. The baby rhino is taken in by a rich merchant, and soon the animal becomes part of his household. She is named Clara and is much loved by the merchant, his children, and his house guests. Clara wanders around the huge house, snacking on fruits and vegetables and being lovingly stroked by the delighted children. It seems like an idyllic life.

“When the merchant invited guests for a meal, he would have the little rhino brought into the room. . . . The men would smile, and the ladies would clap their hands with delight.”

But little animals have a way of growing up into large, awkward creatures and that is exactly what happened to Clara. Soon, she was bumping into tables, knocking over precious knick-knacks, and scaring the ladies. The merchant said she had to go. The poor children cried, yet there was no other solution. But who would take on such a huge animal?

The merchant had invited a captain for dinner who listened to Clara’s story. The captain thought about the problem and then he had the answer.

“I know what we can do!” he said. “I can solve your problem. I’ll take Clara with me to Europe. Nobody there has ever seen a rhino. She’ll be a sensation.”

So the captain, Douwe van der Meer, and Clara set sail for Amsterdam. It was the start of a beautiful, long, and loving friendship.

The pair traveled all over Europe in a special cart built by van der Meer, and people rushed out to see the enormous Clara. She became famous and even visited the palace of King Louis XV who wanted to purchase Clara but van der Meer refused the king’s offer saying the animal was not for sale.

As Clara became well known, artists painted her portrait (these can be still seen in art galleries and museums in Europe). After many years of traveling and adventures, Clara was tired, and her kind friend van der Meer could see that his Clara was ready to retire. The two of them retired to the countryside in Holland.

This story of friendship and loyalty are sure to enchant readers of all ages and the entire family will enjoy following Clara’s journey across the world. The picture book is a subtle lesson in geography, history, and kindness.

The colorful artwork provides a wonderful and vivid backdrop to the story. Artist Laura Fuchs is able to capture Clara’s personality. The rhino’s sad but wise eyes are beautifully depicted as well as all her adventures with her friend and companion.