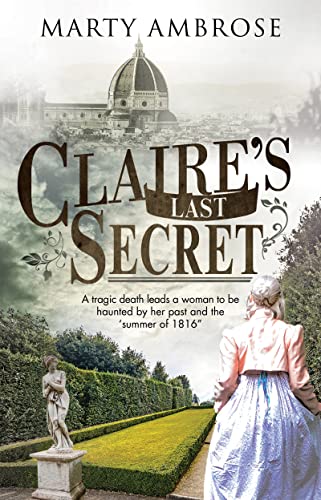 “a mother’s search for a child she’s long mourned and given up for dead, as well as a woman’s resurrection of the emotions and love for a man well-known but scorned in his own time”

Claire Claremont had once been a member of a scandalous, yet famous, literary quintet when she, her stepsister Mary, Mary’s lover, Percy, Claire’s lover, George, and George’s physician, Dr. Polidori, spent a summer in Switzerland. Three of that party are better known to other generations as Mary Shelley, author of Frankenstein, Percy Bysshe Shelley, the poet, George Gordon, Lord Byron, poet and social iconoclast, and John Polidori, author of The Vampyre, forerunner of Dracula and all other vampire novels.

Mary and Claire both gave birth to children and both lost their infants. Mary went on to marry Shelley and become famous in her own right. Shelley, Byron, and Polidori died in dramatic ways. Their names are known by thousands, but Claire . . . ?

Claire grows old in Italy, impoverished, living with and cared for by her niece, Paula.

That is her situation until the day she receives a letter from William Michael Rossetti, nephew of the famous artist. Rossetti is also the nephew of John Polidori and has found among his uncle’s papers mention of Claire’s association with Lord Byron. He’s writing a book about Shelley and wishes to buy any correspondence she has concerning the poet.

Claire is startled to learn in the latest revision of the biography written by Shelley’s son, William, any mention of her has been removed.

“Shock hit me, hard and strong, as if I had been slapped in the face by my own family. If I had been relegated to a mere side note, no doubt my daughter, Allegra, had been deleted completely from our history. Tears stung my eyes.”

Clair is in financial straits. Selling the letters would solve her problems as well as Paula’s. Yet she hesitates. Rosetti’s request brings to mind her relationship with Byron and all that transpired that summer.

“Byron George Gordon. Lord Byron. My lover. My enemy. My torment. He had said to others that he never loved me but I know that wasn’t true. He did love me—in his own way. And he hurt me in every way possible.”

After Rossetti leaves, Claire finds a note under her teacup. It holds one sentence: Your daughter lives.

Allegra, Claire’s daughter and Byron’s, was placed in a convent school and supposedly died there of typhus a few years later. Byron refused to let Claire see the child. Neither would he take her into his home though he acknowledged and provided for her. Now, the idea that, after all these years, her child may still be alive frightens but makes Claire euphoric.

“I knew the risks. Except to my heart. I never thought he would break my heart.”

Seeking help from a priest, Father Gianni, Clair asks him to search the records of the convent at Bagnacavallo where Allegra was placed. Before that can happen, however, Father Gianni is murdered.

Clair is convinced it was to prevent him from discovering the truth of Allegra’s survival.

Thus begins a mother’s search for a child she’s long mourned and given up for dead, as well as a woman’s resurrection of the emotions and love for a man well-known but scorned in his own time, yet destined to become one of the most famous English poets.

Any reader of Frankenstein or The Vampyre will be already aware of the so-called “Gothic Summer” spent in Geneva by Lord Byron, Percy Bysshe Shelley, their mistresses, and Dr. John Polidori. Most of Claire’s Last Secret is a recounting of that event, but told from Claire Claremont’s point of view and therefore given a much different aspect from the other participants’.

The emphasis here isn’t that Claire pursued Byron who gladly accepted her affections, then spurned her after the novelty waned, or that his rejection of Allegra was because he didn’t care for the child. In this version, he kept both at arms’ length to protect them because he was involved in something that, had Claire known, would’ve placed her and his daughter in danger.

Nor is Dr. Polidori, portrayed by Claire as a jealous man, possessive of his employer or Claire’s enemy as she believes. Rather, he’s in effect her silent supporter.

The novel is an easy read, filled with Claire’s reminiscences as well as her sense of shock and hope as she learns that things she interpreted one way are now being shown as misconstrued. Unfortunately, when the story arrives at the point where the reader expects to learn the truth, it ends, bringing immediate disappointment.

Nevertheless, it can’t be said this novel isn’t intriguing, as that stopping-point whets the appetite and makes the reader beg for more. Undoubtedly the subsequent entries in this series will eventually reveal the entirety of Claire’s Last Secret.