The Civil Wars of Julia Ward Howe: A Biography 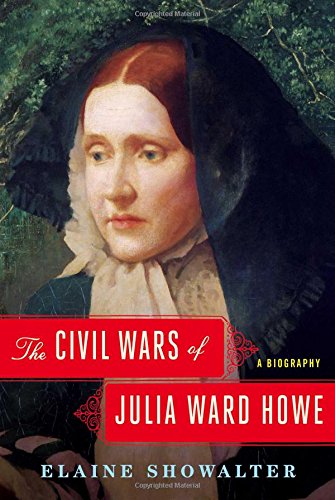 “[S]he wrote, ‘I do not desire ecstatic, disembodied sainthood . . . I would be human, and American, and a woman.’”

In 1916 Julia Ward Howe’s children published the first biography of their famous mother, which won the first Pulitzer Prize in Biography. Several other biographies followed but were little noticed other than by feminist scholars. Now comes noted feminist historian Elaine Showalter’s engrossing book about the woman who wrote the Battle Hymn of the Republic and went on to become a leading voice for women and social justice over the course of her long life.

Howe was born into a wealthy family in New York in 1819 and enjoyed the social privileges that accrued to such 19th century families. But from the beginning she challenged, at least in her thinking, the mores of the time that demanded of women and girls’ silence, civility, and devotion to family.

Intensely bright and curious, she longed as a girl for an education equal to the one her brothers received. Ultimately, she struggled secretly and guiltily to nourish her literary ambition, her gregarious nature, and her deep intelligence and desire to be in the world. Through it all she had to overcome the rigid control that both her father and her husband tried to impose on her.

Julia was married to Dr. Samuel Gridley Howe, 18 years her senior. Trained as a physician, he specialized in educating the blind and became head of the Perkins School in Boston. Although she denied having much maternal instinct she bore six children, five of whom survived into adulthood. It was a tumultuous if long marriage. Howe, known as Chev, was tyrannical and often unkind to his brilliant wife, whom he saw as abrogating her duty to home and hearth, especially as her notoriety and successes mounted. He arbitrarily moved the family multiple times, and his failed investments devoured virtually all of Julia’s fortune.

As a result of Chev’s overbearing nature and his coldness toward her, Julia suffered frequent bouts of depression. Relief came initially from writing poetry for public consumption as well as letters and private entries in her journal.

“My voice is still frozen to silence, my poetry chained down by an icy band of indifference,” she wrote in 1846. In another letter soon afterward she confided that her marriage was a failure, and pondered marriage as a trap for women that drained away their essence because of frequent childbearing. “What is this problem?” she asked, eerily prescient of Betty Friedan’s notorious diagnosis of “the problem that has no name.”

In another way she foreshadowed Virginia Woolf’s novel Orlando when she wrote her secret novel The Hermaphrodite, finally published in 2004. It’s no surprise that a story about androgyny, bisexuality, and homosexuality written by a 19th century woman stunned scholars.

Gradually, during her marriage and certainly after she was widowed, Julia Ward Howe came into her own as a writer, speaker, organizer, social justice advocate, and feminist leader. She survived Chev by more than 30 extremely productive and independent years. During their marriage the Howes’ lives had been peopled by extraordinary individuals of their time.

On her own, Julia added even more notables to her world. They were transcendentalists, writers and poets, politicians and presidents, artists and activists. They ranged from John Brown to Elizabeth Barrett Browning and her husband and included such iconic figures as Oscar Wilde and Helen Keller.

Julia’s embrace of feminism had a profound influence on her life. As she was turning 50 and becoming more engaged in the politics of gender she wrote, “During the first two thirds of my life I looked to the masculine ideal of character as the only true one. . . . [then] in an unexpected hour a new light came to me . . . the new domain now made clear to me was that of true womanhood, woman no longer in her ancillary relation to her opposite, man, but in her direct relation to the divine plan and purpose, as a free agent . . . This discovery was like the addition of a new continent to the map of the world.”

And again, one thinks of a successor: Kate Chopin’s The Awakening.

Julia Ward Howe did not live to see women’s enfranchisement. But in her 91 extremely full and productive years she gave the world of women, including her three surviving daughters, writers all, much hope and a shared voice that could no longer be suppressed. That voice was honored many times, perhaps most significantly in 1908 when she became the first woman elected to the Academy of Arts and Letters.

Two years later as death approached, she wrote, “I do not desire ecstatic, disembodied sainthood . . . I would be human, and American, and a woman.” As Elaine Showalter has deftly shown, “she won her civil wars, and she earned her place in American history.” For that, we can all be grateful.