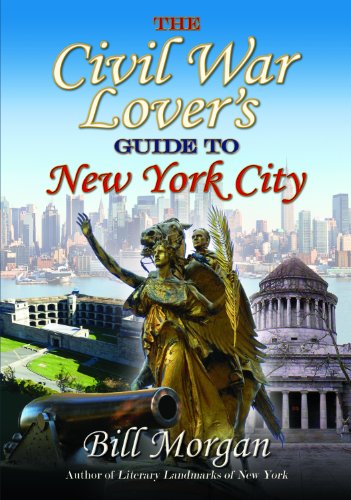 “Mr. Morgan has produced a volume that is a must for any Civil War buff visiting or living in New York City.”

As a New Yorker born and raised in the Bronx, I was very interested in this volume. Of the 157 sites listed, I had only known about and/or visited three.

That being said, Mr. Morgan has produced a volume that is a must for any Civil War buff visiting or living in New York City.

He divides the city up by boroughs, with Manhattan being further divided into eight subsections: Downtown—South of Worth Street; Downtown—Between Worth and Houston Streets; East Village; Greenwich Village; Union Square to Madison Square; Midtown; Central Part and the Upper East Side; and the Upper West Side. Additionally, the last section, entitled AOther Islands,@ reminds the reader that many smaller islands around the city had forts built upon them to protect the approaches to the harbor. Each site is listed by address and most have accompanying pictures. Each site has a history; some short, some long, and why it is important to the Civil War history of the city.

The sites listed include homes, parks, statues, forts, or former locations. Many of these buildings are still standing and the book presents many modern day views of them in color. The author also includes many little know tidbits such as Green-Wood Cemetery in Brooklyn has two graves honoring Confederate generals; that Mrs. Varina Davis, Jefferson Davis’ wife, lived in the Hotel Gerard after his death; that both Robert E. Lee and Stonewall Jackson lived in the city. These are just a few of the intriguing facts presented in this book.

The author includes two appendices. The first lists three significant events that took place in New York City during the Civil War: Lincoln’s Visit to the City; the 1863 Draft Riots; the Confederate Arson Attack in November 1864.

The second appendix is an interview with the author in which he states his reasons for writing this particular volume, what the readers will take away from this book, and what may surprise readers about New York City during the Civil War.

A rather decent bibliography is there for readers who wish to further research this topic.

The one disappointment in The Civil War Lover’s Guide to New York City is the lack of maps, the inclusion of which would greatly enhance this publication. Even without the maps, this volume is a must for any Civil War buff, especially when in New York City.

Peter J. D'Onofrio PhD is President of the Society of Civil War Surgeons, the largest nonprofit, international, educational group dedicated to the study and preservation of Civil War era medicine and surgery. He is also Editor/Publisher of the organization's The Journal of Civil War Medicine. He acts as consultant to many reenactment/living history endeavors and documentaries. Dr. D'Onofrio also appeared on the Arts & Entertainment channel's Civil War Journal episode “Battlefield Medicine.