Civil War Barons: The Tycoons, Entrepreneurs, Inventors, and Visionaries Who Forged Victory and Shaped a Nation 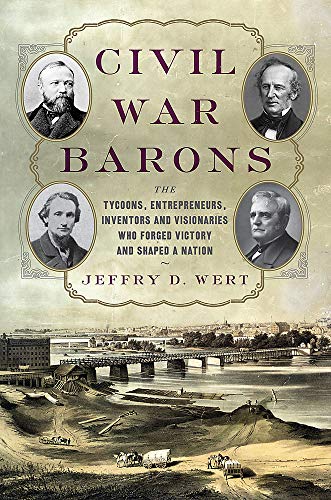 Those who are familiar with the works of author and historian Jeffry D. Wert know that he usually tends to concentrate on the military side of things when it comes to his writing about the Civil War. However, in this case, it is the story behind those industrialists, entrepreneurs, and others who were instrumental, largely behind the scenes for most, in the ultimate triumph of the North which, in the event, still took four years to accomplish.

Inasmuch as these figures normally get short shrift in the history of the period, it is commendable that Wert has undertaken to describe how their inclination, proclivities, persistence, motivation, and ambition laid the foundation for our nation’s postwar industrial expansion in the Gilded Age. The nation’s economy, as a result, went from mostly individually hand-made materials and products to one of an essentially automated, machined assembly or production line format.

The book’s chapters outline everything from administrators, visionaries, inventors, improvisers, and patriots to investors, tinkerers, dreamers, opportunists, and builders and almost invariably include more than one individual under each heading. Although not one is female, these 19 men demonstrated that singular trait which has come to be known as Yankee ingenuity and know-how.

Their know-how influenced everything from the industrial to the agricultural and not only provided the tools, weapons and equipment to wage war successfully but the bumper crops necessary to feed the nation’s people and its armies. Also influential in the war’s outcome was the so-called “creative accounting” necessary to finance all of the above yet still preclude the possibility of bankrupting the country in doing so.

Additionally, each chapter generally covers the lives of more than one figure. Consequently, they are divided into sections detailing the specifics of each man’s contribution to the Union war effort.

Many of these 19 men are familiar to those with some knowledge of United States history while others are somewhat more obscure or less well known. Yet each made his mark in one field or the other. Some of each are listed below for purposes of edification.

Two of the more obscure men, J. Edgar Thomson and Thomas A. Scott, were administrators, and in the case of Thomson an accomplished engineer of prominent Northern railroads. This transportation infrastructure was vital in moving and delivering the necessities of war to the troops at the front.

Another was Henry Burden who invented and patented a horseshoe-making machine that kept Union supply wagons and cavalry mobile, producing seventy million horseshoes over the course of the war’s four years. Lyman Blake is another little known businessman yet his contribution in shoe manufacturing helped lead to assembly line production of footwear for the masses.

More prominent men were James Eads, Jay Cooke and Christopher Spencer. The first made vessels which operated on rivers in cooperation with land forces and led to significant advances into the Confederacy’s interior. Cooke, of course, was the “creative accounting” genius who financed much of the war for the government. Spencer produced a rapid firing, beech loading firearm that gave a firepower advantage to selected Union infantry and cavalry units.

Others are memorable for their names, still recognized today; men such as Andrew Carnegie, Cyrus McCormick, John Deere, and Dr. Edward Squibb. Carnegie got his start during the war and became an industrial tycoon and philanthropist. The second and third were instrumental in the field of agricultural implements while Squibb’s pharmaceutical expertise led to purer, more effective, quality controlled medicines, saving many lives during the war and since.

Wert has properly footnoted and cited his sources and included the traditional bibliography with sources from the electronic to contemporary newspapers, journals, and other documents. A highlight is the extensive photographic section, which has portraits of many of the subjects of the book as well as period photographs, illustrations and engravings of their products and contributions to Union success.

Taken in sum, it is not hard to understand why the industrial and agricultural capabilities of the North could not be overcome by the Confederacy. Although they did not sacrifice on the battlefields, most of these men had to overcome poverty early in their lives and adversity in early adulthood in order to achieve what they did. They certainly deserve to be remembered and receive any honor we can give them.