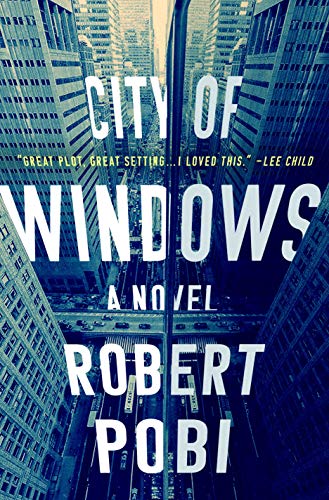 “Robert Pobi delivers a page-turning, hold-your-breath thriller with a bit of philosophy stirred in . . .”

Canadian writer Robert Pobi introduces conflicted, complex, and cantankerous former FBI agent, Lucas Page as the central character in his new thriller series, and scores a ten for a compelling story with enough plot twists to satisfy the most demanding reader.

Dr. Lucas Page, professor of mathematics at Columbia University, wishes his students a merry Christmas and slips away before he is caught by any of the undergrads he teaches.

“The adulation of his students was not a reciprocal relationship, and he avoided mingling with them, sometimes to comic lengths . . . The incurious herds they fed through his auditorium were beginning to border on depressing.”

Lucas is looking forward to his own Christmas break with his wife and five children, all kids from abusive homes or no homes at all. He promises his wife, Erin, he will spend two full weeks at home without interruptions. With New York City locked in with the worst blizzard in decades, Lucas feels he is safe making such a promise.

Then he catches a news bulletin on TV: a scene filled with the flashing lights of patrol cars and the familiar black SVUs that scream FBI. Most disturbing is the sight of Special Agent in Charge for Manhattan, Brett Kehoe, a man he knows well.

“Lucas didn’t have anything more to give these people. Not unless they needed a little resentment.”

Even though Lucas knows that what happened to him was no one’s fault. “There had been no meaning or purpose or even intent in what had happened . . . they had been at precisely the wrong place at exactly the right time.”

Nonetheless, the incident has left Lucas minus a leg, an arm, and sight in one eye. His reluctance to have anything further to do with Brett Kehoe and the FBI is understandable.

Kehoe and the FBI have need of Lucas, because no one else has his skill set. No one else can reduce a crime scene and, most importantly, the track of a bullet from target back to the location of the shooter to a mathematical certainty.

Much as Lucas wants to turn down Kehoe’s request for help, he can’t. The target of the unknown sniper is his old partner, shot with uncanny accuracy from several hundred yards away through a blinding snow storm. It is an impossible shot taken during a four second window of time when the target was in sight. Only a sniper with almost inhuman skill can make such a shot.

Standing in the blizzard at the crime scene, growing numb from the cold, Lucas closes his eyes and does that mathematical trick that most of the FBI other than Kehoe believe no one with a human brain can do: He reduces the city “to an intricate geometry” with each object in the landscape, from bricks to lamp posts to buildings, assigned a numerical value.

He points out the roof top of a tall building as the location of the sniper, who, of course, is gone, leaving no trace evidence, nor any film proof on security cameras that he was ever there.

Lucas’s old partner is only the first murdered by the unknown sniper. Next is a female agent of the Bureau of Alcohol, Tobacco, Firearms and Explosives, shot from an impossible distance in the wind and blowing snow during a very short window of opportunity while the agent rode on a tram.

The only evidence is two tapes tied on the bridge to show wind direction and distance. The sniper’s bullets are armor-piercing with a trace of a meteorite at their core, bullets that must be modified by hand.

Lucas visits a gunsmith able to modify the bullets. The gunsmith is murdered shortly after talking to Lucas, but not by the sniper. Lucas has no idea of the murderers’ identity and wonders if the sniper has an accomplice who is tying up loose ends.

The sniper’s next victim is a correctional officer, and again he leaves no trace evidence except the bullet. Same type of bullet as in the first bullet.

An FBI agent, an ATF agent, and now a correctional officer, all murdered from a distance using the same type of bullets. Lucas now knows that these are not random kills; someone is targeting federal law enforcement agents. The question is why these particular agents? What do these victims have in common?

With his driver, or maybe his minder, Special Agent Whitaker, an African American woman with an attitude, Lucas continues his search for the sniper. He now knows the link between the victims, and he knows the motive: revenge.

What he doesn’t know is who is the sniper, and why is Lucas’s family now a target.

Robert Pobi delivers a page-turning, hold-your-breath thriller with a bit of philosophy stirred in, but not enough to alienate either the Left or the Right. His use of one of the FBI’s more famous debacles to add reality to the sniper’s motive is effective.

Lucas is an interesting character: conflicted, rude, sarcastic, not fond of his fellow man, but devoted to his wife and children. Pobi successfully juggles this dichotomy of Lucas’s personality most of the time.

If one is looking for symbolism, then the fact that Lucas is missing half of his body—leg, arm, eye—is a visual presentation of unconditional love for his family on one hand, while feelings for those outside the family are an artificial construct.

City of Windows is an unusual story, suspenseful with a strong setting, carefully constructed plot that requires suspension of disbelief, but not a lot. The murder of law enforcement officers for reasons of a misguided desire for revenge is a common theme in today’s society. Unfortunately.