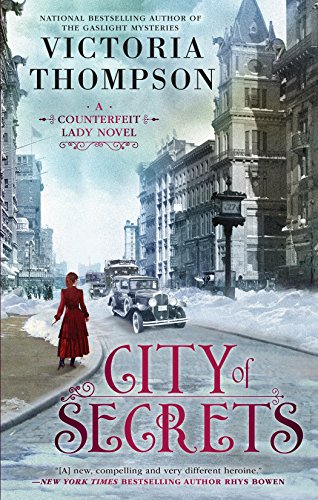 “Elizabeth is an unusual new type of woman who is self-reliant. Gideon is a new type of man who is learning to appreciate the unfairness of the plight of women.”

City of Secrets is the second book in a new series by Victoria Thompson who is known for her long running Gaslight Mysteries about a midwife in Victorian New York City. The Counterfeit Lady Novels feature Elizabeth Miles, daughter of a notorious con man. She has been befriended by a well born widow who is a suffragette, and, in the first book, Elizabeth met and fell for Gideon Bates, a very upright lawyer who is her friend’s son.

Set in 1917 on the brink of WWI, the story is a fun romp for the reformed grifter who is cheerfully trying to master her lover’s environment with the help of his mother. The first line gives a sense of how she’s fitting in: “Elizabeth had to tell more lies on a Sunday morning at church than she ever had trying to cheat a mark out of fifty thousand dollars.”

Although both Gideon and his mother are aware of Elizabeth’s background, they are also determined to make her fit for “society.” To that end, Elizabeth is constantly consulting the writings of Mrs. Edith B. Ordway, author of The Etiquette of Today. This new learning is often juxtaposed to what she was taught by her master con artist father, the “Old Man.”

It’s a serious dilemma for the young couple when they try to help a young widow whose husband was blackmailed before his suicide. Gideon never lies, and Elizabeth is trying hard to leave behind the deceits of her past, but they come to see that exposure of the blackmail will only harm the poor widow.

The “Old Man” has no such scruples, and Elizabeth is able to manipulate him into helping out. The plot becomes a caper in which multiple threads are spread to capture the culprits by using their own greed. The story unfolds as a delight of complications and misunderstandings reminiscent of a Shakespearian comedy.

At the end, Gideon has to relinquish some of his righteousness while maintaining his integrity. He explains himself in an exchange with Elizabeth:

“’The reason I love the law so much is because I love justice, and I finally realized my sense of justice was too limited.’

‘Probably because you’re a man.’

‘You may be right. Because the world is different for women than it is for men. For example, I’ll never have to worry about my spouse dying and leaving me penniless and helpless.’

‘That’s why the Old Man taught me the grift, you know.’”

The time period of the series is interesting is because the position of women was changing radically. The first book, City of Lies, dealt with the arrest and treatment of suffragettes. While light hearted in tone, this book deals with the plight of a young widow who has few defenses against the laws and customs of a male dominated society.

Elizabeth is an unusual new type of woman who is self-reliant. Gideon is a new type of man who is learning to appreciate the unfairness of the plight of women. His spirited but genteel mother makes sure he gets the lessons and it seems sure that there will be more such learning experiences to come with each installment of The Counterfeit Lady Novels. City of Secrets is an amusing story in the vein of Rhys Bowen’s Royal Spyness series and Susan Elia MacNeil’s Maggie Hope series.