The City: A Novel 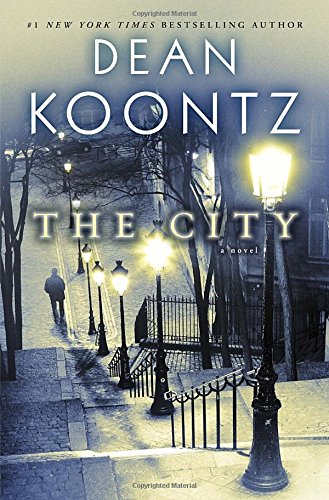 “The City is many things: serious, light-hearted, nostalgic, courageous, scary, and mysterious. But above all else it is a wonderful trip back in time when life was simpler and children were largely innocent.”

Dean Koontz has had 14 #1 New York Times bestsellers. His latest novel, The City, may increase that number.

A beautifully crafted and poignant story set in the 1960s, The City magically morphs a boilerplate big city into a strange apparitional person known as Miss Pearl. The ethereal woman tells the story’s protagonist, 10-year-old Jonah Kirk, that she is the soul of the city created from all of its people. Early on in the book, she mysteriously provides a piano for Jonah who is a musical prodigy, and then advises the little boy about some important events that will occur in his lifetime.

Jonah belongs to a musically gifted family—his mother is an extraordinary singer and his grandfather a piano man. Both work in the music industry and are well respected by all who know them.

Jonah’s grandfather becomes his male role model because Jonah’s father abandoned the family by running off with an attractive upstairs neighbor when Jonah was eight months old. Tilton, the father, didn’t come back into Jonah’s life until eight years later, an event that Jonah wishes never happened. Despite the absence of his father, Jonah’s bond with both his mother and grandfather more than make up for the loss.

Jonah’s first-person account of growing up in the big city is one that will have readers staying up late at night. Nostalgia seems to turn up on almost every page as Koontz sets the saga during the days of the Vietnam War, rotary telephones and phone booths, Woolworth’s lunch counters, and big band nightclubs.

A complex child despite his tender age, Jonah’s youth and innocence belies the maturity he demonstrates. When adversity smacks Jonah in the face, he doesn’t whimper or run away. He faces the challenges head on.

In addition to Jonah, the author has created several memorable characters in this well-crafted story, several of whom live in the same apartment building as Jonah and his mother. Mr. Yoshioka, a Japanese tailor, becomes a mentor of sorts for the boy. He inculcates young Jonah with advice regarding morals and ethics, as well as centuries old Japanese traditions. Readers will discover this sage is more complex than they think.

Fiona Cassidy, a mysterious young woman who seemingly appears out of nowhere, is a haunting character who frightens Jonah. But he is so curious about who the young woman is and why she suddenly appears in his apartment building that he constantly places himself in danger trying to determine what her objective is and what power she may possess.

Mr. Smaller, the building superintendant, seems like a normal overworked janitor, yet he hides a deadly secret. Jonah eventually discovers a link between Smaller and Jonah’s father, one that has catastrophic implications.

The City is many things: serious, light-hearted, nostalgic, courageous, scary, and mysterious. But above all else it is a wonderful trip back in time when life was simpler and children were largely innocent. Koontz ratchets up the mystery/suspense as the tale moves forward and then supplies a satisfying ending. He takes his readers on a heartwarming journey that everyone who grew up in a big city will appreciate and reminisce about.