City of Light, City of Poison: Murder, Magic, and the First Police Chief of Paris 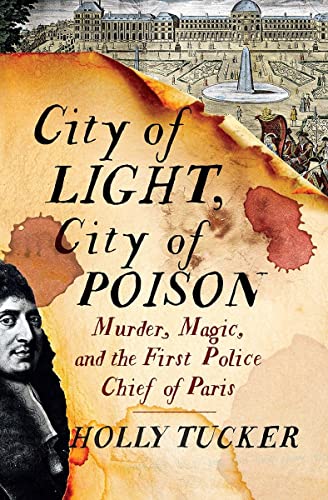 One can always trust the police to be dogged and to keep voluminous records, though they’re not always accurate. Holly Tucker was able to write her new book—City of Light, City of Poison: Murder, Magic and the First Police Chief of Paris—because Nicholas de La Reynie, the French top cop, keep his own records of his investigations into criminal matters in the 17th century. His boss, Louis XIV, burned the only other copy, probably to cover up the crimes that rocked his throne from about 1665 to 1670.

In that five-year period, the criminal and the civil lieutenant of Paris were both murdered, just a year a part. In 1665, Jacques Tardieu, the criminal lieutenant, was stabbed to death in the course of a home invasion, as it would be called these days. Two brothers, Rene and Francois Touchet were arrested, charged with murder, found guilty, and executed in public before a large crowd that watched the spectacle.

Then in 1666, Dreux d’Aubray, the civil lieutenant of Paris, was poisoned to death. So were his two sons. Not surprisingly the French aristocracy was terrified. Louis XIV acted swiftly. On March 20, 1667, he appointed Nicolas de la Reynie lieutenant general of the police in the French capital.

Holly Tucker tells the story of his dogged work with great gusto and with an amazing array of facts. She also offers a fascinating portrait of the City of Light and its dark side. In Chapter one, “Crime Capital of the World” she explains that Paris didn’t have a centralized police force at that time, but rather 48 commissioners each responsible for his own quarter.

Tucker adds that the commissioners “learned quickly that fighting crime did not pay,” but that “what did pay was the mountain of bureaucratic and legal tasks required after crimes were committed.”

City of Light, City of Poison describes a string of murders that took place over 300 years ago, but that feels very contemporary. Indeed, Nicolas de la Reynie might be the star of a TV series about “the Affair of the Poisons” that led to the execution of 34 people and the imprisonment of 218.

Tucker, the author of Blood Work: A Tale of Medicine and Murder in the Scientific Revolution, offers an array of complex characters including Madame de Montespan, one of the Louis XIV’s mistresses, who was implicated in the plot to poison Parisians and to work her “black magic.”

The woman who was found guilty of making the poisons—Catherine Voison—was burned to death in February 1680, just a decade or so before the witch trials in Salem, Massachusetts. City of Light, City of Poison conjures up 17th century Paris and makes it seem close to the present day.

In hindsight, one can’t help but wonder if Voison was really guilty or if a femme fatal who was framed. She also performed abortions, which no doubt made her a prime suspect and an easy mark.

Cops, criminals, and law-abiding citizens might all enjoy Tucker’s investigation of Paris a century before the French Revolution that abolished the old police department and installed a new one. The police, we always have with us.