City of Fortune: How Venice Ruled the Seas 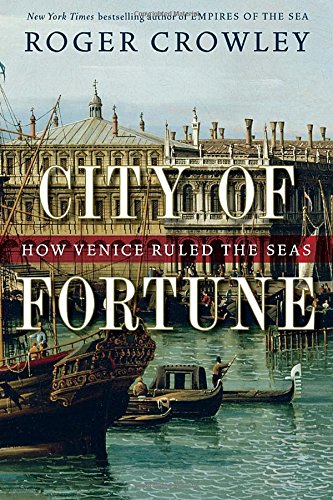 “City of Fortune: How Venice Ruled the Seas is a fantastically fast-paced historical narrative and a welcome read. Mr. Crowley’s vivid pairing of broad historical themes with interesting historical characters leaves the reader grappling with the problematique of the construction of Venetian identity and the confusing means that Venice situated itself in the emerging modern world.”

Roger Crowley’s masterful narrative City of Fortune: How Venice Ruled the Seas chronicles the 500-year span of the Venetian Empire from the Middle Ages to its colonial and merchant encounters with early modern Europe and the Mediterranean.

City of Fortune builds the narrative of Venice’s history subtly, easily, and elegantly, story by story, character by character, theme by theme. Indeed, one gets so caught up in the seamless flow of City of Fortune’s telling, that the reader is actually surprised when the book ends—we simply expect the author to pick up the history of the Ottoman Empire where he ended the Venetian.

This begs an interesting question, however, and one that is particularly pertinent to City of Fortune: What makes a history good or compelling? Is it in the characters? Or the setting? The careful juxtaposition of both? One of the most difficult questions to grapple with in writing history—in writing good history—is how to strike a meaningful balance between character biography and the sweeping scope of a broad narrative history.

On the one hand, through specific character biography, an audience can understand a historical figure as the summation of his or her various historical contexts. Broad historical narrative, on the other hand, allows the reader to appreciate the longue durée—or the long view, the big view, the broad telling of history and is approach and general schema. For a written history to be successful, an author must generally pick which type of history he or she wants to write and intellectually commit to that type history.

In City of Fortune: How Venice Ruled the Seas, however, Mr. Crowley brilliantly juxtaposes both types of history in a sweeping narrative arc. His broad, longue durée is character-based that history begins with Venice’s rise and solidification as empire before the Fourth Crusade (1000–1200) and the sacking of Constantinople in 1204 and follows the Empire’s colonial efforts to the Ottoman-Venetian War of 1499-1503.

In the Prologue, Mr. Crowley argues that “Departure, Risk, Profit, and Glory” comprised the cardinal directions of the Venetian empire building for those five hundred years. Indeed, Mr. Crowley weaves these four themes throughout City of Fortune as Venice builds its way from a rather humble backwater lagoon and series of merchant trading routes to its beginnings.

Thematically, City of Fortune emphasizes the conundrum of Venetian identity and how Venice constructed its identity, specifically drawing on those four tenants of departure, risk, profit, and glory. Immediately, the reader sees that Venice is simply different in terms of its resources and its resource potential than other cities in Europe and the broader European and Mediterranean experience. Specifically, Venice’s economy and social organization was mobile, flexible, arguably more democratically determined than other European feudal systems or city-states, but above all, it was fundamentally defined by its investment in and commitment to a maritime existence.

This maritime commitment provided such a unique aspect that often others—allies or enemies—simply had no means to make sense of a maritime force. For landlubber Crusaders, the thought of a sea-based attack on Constantinople in 1204 was ludicrous at best and suicidal at worst.

For poets, humanists, and historians like Plutarch gazing out at vessels disappearing across the Venetian lagoon, the spectacle was practically beyond comprehension. “When my eyes could no longer follow the ships through the darkness, I picked up m pen again, shaken and deeply moved” (pp. xxxi).

Coming back to the question of writing good history, the particular genius of Mr. Crowley’s history is his narrative approach arche coupled with historical figures that brilliantly illustrate the contextual milieu of the times. Consider, for example, Mr. Crowley’s several chapter sketch of Venice’s serving doge, Enrico Dandolo from the early thirteenth-century. The pious, blind, and scathingly shrewd Dandolo directed and negotiated Venice’s incredibly profitable contract as a major financial backer of the Fourth Crusade through the contribution of ships and the lending of money.

City of Fortune: How Venice Ruled the Seas is a fantastically fast-paced historical narrative and a welcome read. Mr. Crowley’s vivid pairing of broad historical themes with interesting historical characters leaves the reader grappling with the problematique of the construction of Venetian identity and the confusing means that Venice situated itself in the emerging modern world.