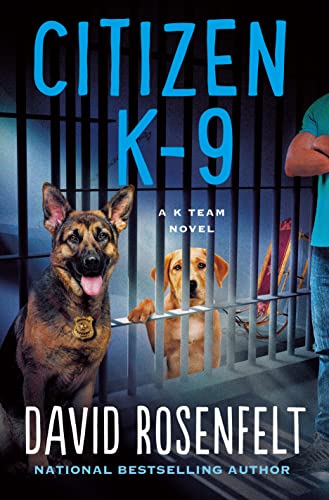 If you are looking for a strong K-9 presence in David Rosenfelt’s newest novel, Citizen K-9, you won’t find it here. That being said, it’s a good mystery with several interesting plot twists.

Simon Garfunkel, the German shepherd K-9, is retired from the Paterson, NJ, police force with his handler, Corey Douglas. Douglas is in the investigative business with several other ex-police officers: Laurie Collins, and Marcus Clark and Laurie’s husband, attorney Andy Carpenter, whose role is to provide legal advice and keep the team out of trouble.

When Pete Stanton, captain in charge of the Homicide Division of the Paterson Police Department calls upon the team, he challenges them with several cold case files that need to be cleaned up. The one they select is close to home for Corey.

Seven years earlier at Corey’s high school reunion, two classmates, Chris Vogel and Kim Baskin went missing, and have never been seen or heard from since.

Here Rosenfelt takes the reader into the criminal world of gambling, drugs, and high-stake crime bosses. It doesn’t take long for Corey and his team to determine that the previous investigation had some shortcomings, plus the world of investigation and forensics has changed giving the investigators several new paths to follow.

Digging deep, they learn that crime boss, Joseph Russo, initially looks like a good target as Chris was deeply in debt due to his gambling losses, but a meeting with Russo quickly sends the team to another target: Espinoza, a prominent drug dealer in North Jersey, and Russo’s primary competition.

Espinoza is a violent character and loves nothing better than carrying out his own revenge. The team learns that Chris Vogel was working undercover for the federal government to provide evidence against Espinoza.

Espinoza climbs to the top of the ladder of suspects in Chris and Kim’s deaths. Throughout the story, it is not made clear what role Kim plays in her own death other than being in the wrong place at the wrong time.

While Rosenfelt brings Espinoza into the story about halfway through, he leaves the door open for some other suspects while keeping Espinoza on top of the list.

One of the clues that Rosenfelt tosses into the mix is a playing card that was found in Chris’s car on the night of the reunion. A curious clue, indeed, as Corey learns that this item was not pursued by the initial police investigation.

They follow this thread and learn that several other unsolved murders across the country have the same clues left at the murder scenes. It doesn’t take long for the team to put the pieces together and recognize the connection.

As they begin to close in on Espinoza, Rosenfelt turns the tables when Espinoza is murdered. And yet another pathway opens up. Corey follows the leads he is given and begins to tighten the knot on several murders that have all now been bound together.

The climactic scene uncovers the unexpected guilty party in a surprise ending. Rosenfelt ties up all of the loose ends into a neat little package and a satisfactory ending.

So . . . what about Simon Garfunkel? Rosenfelt brings Simon into several scenes where he is noted for recognizing situations that elude the human investigators, but to say this is a K-9 mystery would be a stretch.

Should this series continue, one can only hope that Simon will play a greater role in the investigations, the crimes, and the resolutions.

All in all, a good mystery but not a K-9 story.