Circle of Friends: The Massive Federal Crackdown on Insider Trading---and Why the Markets Always Work Against the Little Guy 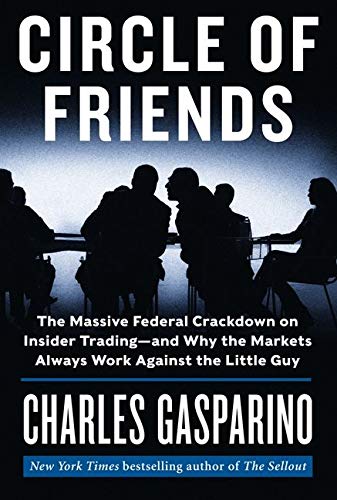 In the wake of one of the worst financial crises in memory, the matter of insider trading may seem like small potatoes.

Estimates of these illegal gains in recent years pale in significance to the amount of wealth wiped out in the systemic meltdown. But it is a vitally important subject, in that the increasing perception and appreciation of efforts to stamp out this market abuse contribute to an atmosphere of fairness and rebuilding trust between the public and the financial services industry—a sector in which trust has been so severely eroded during the crisis.

As this is written, several of the characters described in Charles Gasparino’s book are still awaiting trial. The billionaire head of hedge fund firm SAC, Steve Cohen, is being pressed to testify, so far to no avail.

But a trial date has been set in November for one of his former employees, Matthew Martoma, who is accused while at SAC of profiting, to the tune of more than a quarter of a billion dollars, from healthcare company trades using inside information.

Others, such as ex-Moody’s analyst Deep Shah, remain out of reach in foreign climes.

Mr. Gasparino is an established financial journalist who has put intensive work into this compelling saga of lawmen’s efforts to identify and collar some of the worst offenders in US insider trading since the days of Milken and Boesky in the 80s.

These investigations, ending in successful prosecution of Galleon Group head Raj Rajatnaram, who was sentenced to eleven years in prison, began during the palmy days of 2007, when the market was at its height—before it would commence its disastrous fall as the subprime crisis kicked in.

In the subsequent wreckage, it became somewhat easier to identify abuses, which have unfortunately always been a part of the market and will continue to be, given the difficulty of defining exactly what insider trading is, and of trying to follow the tracks that perpetrators take great pains to cover up.

The seemingly unusual feature about many convicted of large-scale insider trading is that most of them are already wealthy, one hopes mainly through legitimate business dealings, and that the insider abuses we learn about contribute relative peanuts to their overall financial standing.

It’s estimated that the insider trades for which Rajaratnam was convicted “only” amounted to a few tens of millions of dollars, versus the couple of billion that he is estimated to be worth.

Similarly, the inside talk that sent billionaire Martha Stewart to jail for several months apparently only saved her about $50,000.

What is it then about such people that compels them to this behavior? The rush of living on the edge? A sense of power? Simple arrogance? For all their brilliance and market power, those convicted appear to lack simple moral judgement, which creates a very dangerous situation.

As long as these human failings persist among leading practitioners, the finance industry has little chance of gaining the stature it ought to deserve. How many investors, seeing their fund managers sent to prison or even accused of market abuse would be happy to keep their hard-earned savings within such a system? It does not appear that SAC has lost that many investors (yet).

Of course this argument is not limited to the financial system, which has had far-reaching impact (not so much from insider trading, but from poor policies and practices on the part of banks and governments) but regularly extends to politics and other spheres of public and private life.

The efforts of regulation and law enforcement to stem market abuses are laudable, even if it has to extend to wire-tapping and intimidation, but is this the solution? How do we create within organizations and managements a far-reaching culture of respect and fairness?

Mr. Gasparino’s book is interestingly documented and ultimately depressing in revealing the scale and intractability of a problem that one fears will continue, even more so as economies improve.

Ed Bace is a financial professional whose has been a senior corporate analyst at Standard & Poor’s, Executive Director at a global investment bank, and a finance educator in London at the CFA Institute and BPP Business School.