Cinderella Ate My Daughter: Dispatches from the Front Lines of the New Girlie-Girl Culture 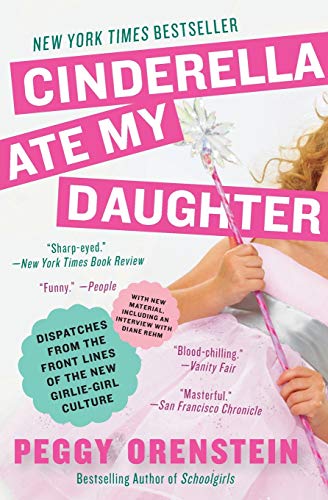 Peggy Orenstein, noted journalist and bestselling author has spent two decades reporting on the issues of womanhood, girlhood, and female empowerment, and she makes a surprising confession on the first page of her new thought-provoking book, Cinderella Ate My Daughter: Dispatches from the Front Lines of the Girlie-Girl Culture.

“When I finally got pregnant myself, I was terrified at the thought of having a daughter,” she wrote.

And yet, of course, that’s exactly what happened. But Orenstein wasn’t about turn her daughter Daisy over to today’s girly-girl, pink and princess-obsessed girl culture without a fight—or at least a damned interesting debate.

Bringing a daughter into this new consumer-driven world filled with Disney Princesses and everything pink alarmed Orenstein enough that she grabbed her reporter’s notebook and set out to interview marketers, psychologists, educators, parents—even little girls themselves—to find out if the torrent of femininity being hoisted on our young daughters as young as 24 months is doing irreversible damage to the women of tomorrow.

While it’s not unusual to see little girls out-and-about dressed in miniature wedding gowns and Cinderella costumes and sporting colorful tutus that can be found in bulk at Costco, is the actual issue of what these young girls are actually wearing and the message it sends, really getting in the way of parents raising confident, considerate, and well adjusted girls in these complicated times?

In her search for the answers, Orenstein travels to Disneyland, American Girl Place, and the American International Toy Fair; visits a children’s beauty pageant (in which she is surprisingly nonjudgmental); and attends a Miley Cyrus concert. What this journalist finds might make parents think twice about swiping their debit card over and over again to purchase glitter and make-up and frou-frou for their tween when they discover just how much corporations are making off their daughters.

Once upon a time, Disney executive Andy Mooney attended a “Disney on Ice” show and found himself “surrounded by little girls in homemade princess costumes,” and before he could say, “Bibbidi-Bobbidi-Boo!” he and his team created, what would become known in-house as ‘Princess.’” Mooney’s visit to the ice show brought about 26,000 Disney Princess items on the market and in 2009, Princess products generated sales of $4 billion.

That’s a lot of fairy dust.

In her often humorous quest to get to the bottom of all this pink stuff, Orenstein does uncover some disturbing news from the American Psychological Association that claims that the “girlie-girl” culture’s emphasis on beauty and play-sexiness can increase girls’ susceptibility to depression, eating disorders, distorted body image, and risky sexual behavior. But many older parents might be asking themselves why their daughters suffered depression, eating disorders, and other harmful issues before Disney decided to make Sleeping Beauty dresses in size 2T?

While Orenstein, a self-described feminist, is struggling raise a confident, intelligent girl in the age of Toddlers & Tiaras, at the same time helping others do the same, many parents who have gone on to raise confident and reasonably sane Generation X and Gen Y girls might be looking at her and saying, “Relax already.”

Girls have suffered though self-confidence issues, sexuality problems and eating disorders since Eve supposedly ate that apple, but many parents of young girls might finish this book and realize that yes, there might be a little too much glitter and tulle in their lives right now, but does it really cause any lasting effects?

While the book is an easy read (think a great mommy blog), Orenstein doesn’t really come up with any hard remedies to the questions she has raised, but rather given readers an invitation to join her in a very nice conversation between moms on the playground as their daughters climb trees and play Barbies while dressed in their pretty pink fairy costumes.

Which seems like a pretty nice way to spend a few afternoons.