Churchill's Band of Brothers: WWII's Most Daring D-Day Mission and the Hunt to Take Down Hitler's Fugitive War Criminals 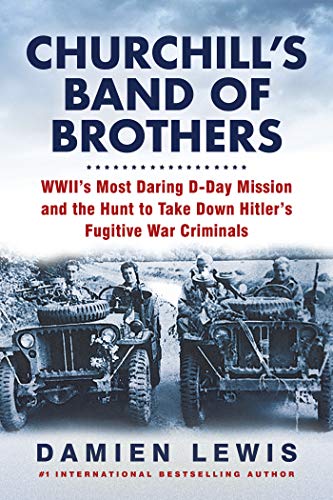 “Eighty years later World War II continues to provide new stories of bravery and sacrifice, as well as new evidence of the evil of the Nazi regime. The personal bravery and loyalty of these men to their comrades is a remarkable story that deserved to be told.”

During World War 2, the Allies created a number of special operations forces to conduct raids, sabotage, and other critical missions in German-occupied Europe. The success of these units led to one of the most infamous actions by Adolf Hitler, the Commando Order, which stated that Allied forces such as Britain’s commandos and Special Air Service troops, were to be treated as spies and immediately executed upon capture, even if they were wearing military uniforms, a direct violation of the Geneva Convention and the laws of war.

This secret directive was unknown to the Allies as they prepared to parachute multiple teams of SAS troops into France behind German lines to support the D-Day landings. These SAS teams were to make contact with the French underground to destroy railroad bridges and tunnels to delay the arrival of German reinforcements to the Normandy beachheads.

Unfortunately for the Allies, German counterintelligence, headed by the ruthless Gestapo, had penetrated many of the underground networks and captured numerous Allied agents, giving them the ability to run them as double agents and prepare a trap for many of these parachute teams.

This is where this compelling book begins, reading like an Alistair MacLean novel, as a group of 12 SAS soldiers led by Captain Patrick Garstin parachute not once, but twice into occupied France, defying the odds by attempting two of these impossible missions to keep German armored divisions away from the Allied beachheads.

Although the team successfully completed their first mission and was rescued by an equally audacious allied transport plane under enemy fire, their second mission ended in disaster as German troops surrounded the drop zone, tipped off by the Gestapo that an underground supply drop was happening.

The Germans were not expecting the 12 SAS troops, but quickly opened fire and in the ensuing firefight, nine of the troops were either killed or captured and another three escaped by jumping late and over the drop zone.

The Germans brought the survivors back to Paris where they were brutally interrogated by the Gestapo until the decision was made to take them out to a remote wood and shoot them. As the Germans lined up the British troops for execution and open fire, two of them were able to escape, and they began their long journey back to Allied lines and eventual justice for the murderers of their comrades.

But the story doesn’t end with their successful escape and return to Allied lines. When they related their story, the Allies finally comprehended the consequences of Hitler’s directive and began to hunt down those Nazis responsible for the war crime of shooting Allied commandos fighting in uniform. Some of the description of the treatment of SAS troops captured by the Gestapo is still shocking 80 years later

This hunt actually began as soon as the Allies liberated Paris and small numbers of SAS troops started to search for the identity of the Nazis who shot Captain Garstin and his men. As they did so, they learned of other SAS men murdered after capture during the fighting in the Vosges Mountain region of Germany in late 1944/early 1945. This only deepened their resolve to find the Nazis responsible and bring them in front of the War Crimes Tribunal created by the Allies after Germany’s surrender.

Unfortunately, the post-war era brought complications in their quest for justice. The SAS was officially disbanded, and with the onset of the Cold War with the Soviets, enthusiasm for punishing Nazi war criminals began to wane. But the SAS men were persistent and they finally ran most of the men responsible for the massacres to trial, where they finally got their due.

Eighty years later World War II continues to provide new stories of bravery and sacrifice, as well as new evidence of the evil of the Nazi regime. The personal bravery and loyalty of these men to their comrades is a remarkable story that deserved to be told.