Church of Marvels: A Novel 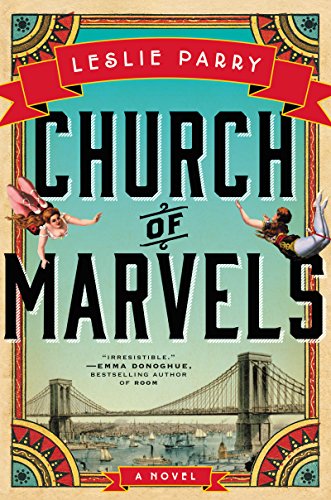 In this well-written, gripping, Dickensian first novel, Leslie Parry reveals the terrible underbelly of New York’s lower east side circa 1895. Through the lives of three main protagonists and an assortment of related characters, whose lives intertwine as the novel progresses, we are introduced to and grow to care about two sisters from Coney Island who are raised in the sideshow atmosphere from which the novel derives its name: a person who suffers the cruelties of a sadistic mother-in-law and a lunatic asylum, and a young man who cleans tenement privies by night. An abandoned infant, an abortionist, and an assortment of other characters add to the mix of despair and destitution.

It can take a while to truly engage with this complex work and to care about the characters, as well as to realize their connections to each other. The narrative twists and turns in challenging ways, offering satisfying surprises as the story develops, but the challenges are rewarded by the story’s end in quite marvelous ways. These surprises must be left to readers to discover lest too much be said that would destroy the plot line. Suffice to say that Parry handles the growing suspense and dramatic conclusion of her tale admirably.

Based on a great deal of research as well as some random reading by the author, including books about New York, labor, medical and vaudeville history, opium dens, hair weaving, river transport, and more, Parry has constructed a heartbreaking, compelling tale that almost incredibly ends with a modicum of hope for those in the fin de siècle lower class of the Gilded Age. She admits it was hard to keep track of her own story at first.

“I began writing vignettes about people who populated different areas of the city,” she explained in one interview. “I knew the direction I was traveling—I knew, in a loose way, how I wanted the plot to evolve—but I didn’t always have a clear path. . . . But I was guided by the overall sensibility of the story. I had to trust the characters.”

In the end, that is her gift and her writer’s talent, for we, too, come to trust and care about the characters in this tense, sad, dramatic tale. We care that the baby survives and is found by its mother, we care about the two sisters and what they reveal about their past, we care about a man who cleans night soil, and a woman who reveals her humanity after first appearing sinister. We care about a young man-woman who exhibits a courage few of us could equal.

Only a richly imagined, well-written story full of historical realities and peopled with unique characters can make us feel that way. Narrative skills aside, that is perhaps Leslie Parry’s greatest gift in her debut novel.