Church of the Graveyard Saints 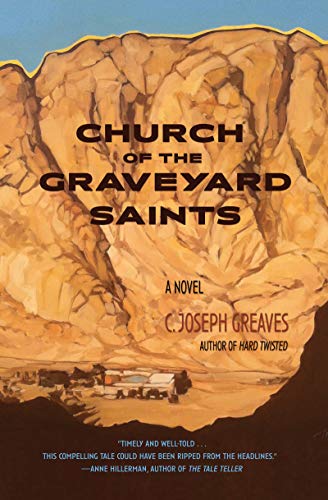 “Church of the Graveyard Saints crackles with fully realized characters in a vivid setting.”

Addie Decker is coming home from Los Angeles to southwest Colorado, to a land her parents and grandparents “had claimed and defended, cleared and plowed, watered and seeded, transforming barren tracts of sage and saltbrush into settlements that had grown into towns and that might someday grow into cities.”

Addie is coming home for the funeral of her Grandma Vivian. She’s bringing back her boyfriend, Bradley Sommers. She met him in her first semester in graduate studies at UCLA. He heads the university’s Center for Climate Change. He is 12 years older than Addie.

A month into their relationship, Bradley was also given a reason to travel to Colorado—to lead the opposition to the planned expansion of carbon dioxide extraction in and around the Canyons of the Ancients National Monument, right next to Addie’s childhood home in McElmo Canyon.

So Addie is returning not only for family ceremonies but as Bradley’s graduate assistant, a fact she would prefer to keep under wraps and not have broadcast all over the canyon or the nearby town of Cortez.

In fact, the return home is something Addie vowed would never happen. She had long sought escape. Now, the twin reasons for heading home are tearing her apart, particularly her reunion with a family “whose indomitable will to settle the land around her was matched only by Addie’s iron-determination to escape it altogether.”

(As Addie’s father later notes, she is “third-generation stubborn.”)

Church of the Graveyard Saints, Chuck Greaves’ sixth novel, is a rich novel with many layers and rotating points of view. Addie carries the heaviest load, but we also see the story through the eyes of Bradley Sommers; Addie’s father Logan; and Colt Dixon, an old flame from Addie’s high school youth. Colt, whose limited career horizon has left him trapped in his hometown, married Addie’s best friend; however, that relationship is now on the rocks.

Written about the canyons where Greaves now makes his home, the story is rich with atmospheric detail and chock full of three-dimensional characters beyond the quartet of main players (even Addie’s dead mother is a weighty presence). The novel shifts seamlessly from tense family and romantic drama into an eco-thriller climax that will be familiar to anyone familiar with the 2016 Malheur Wildlife Refuge standoff in Oregon or the 2014 armed confrontation in Nevada between federal officials and Cliven Bundy, who didn’t believe in paying grazing fees for his use of federal property.

It’s that relationship between man and the land that is the true heart of Greaves’ novel. It’s today versus tomorrow. It’s now versus long-range planning. It’s jobs and food on the table versus the public good. It’s manifest destiny versus global citizenship. And it’s also the ability, or inability, to sort things out through civilized conversation—or not.

“Mr. Boudreau was a rumpled man in a rumpled suit, whose office smelled of yesterday’s cigars and tomorrow’s laundry.”

“Silvery clouds floated down the canyon—a balloon parade whose drifting shadows darkened the valley floor below.”

“Colt’s gun was a lethal slash of blued steel and lacquered walnut whose virtues he’d extolled to Bradley with a reverence on usually reserves for newborns or religious icons.”

The old-timers, in fact, carry a religious-like faith in the land and its ability to provide, even as they disregard their stewardship on behalf of future generations.

Church of the Graveyard Saints crackles with fully realized characters in a vivid setting, paints a stark contrast in the competing values, and takes Addie Decker on a journey that might find a chink in her stubborn determination to never go home again. It might just be time for Addie to fully comprehend her late grandmother’s warning—“you’re not punished for your sins, you’re punished by them.”