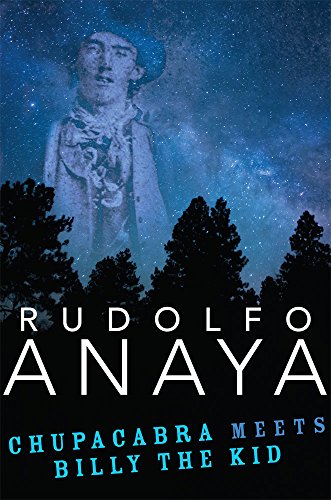 After burning out working with youth gangs in Los Angeles, Chicana social worker Rosa Medina retreats to Puerto de Luna, New Mexico. There, she intends to write a novel about Billy the Kid. In an exchange of emails with her friend Marcy, Rosa complains that she can’t get close to her subject, so Marcy suggests she enter a wormhole and go back to 1880 to watch the Lincoln County War and Billy’s death at the hands of Pat Garrett for herself.

Rosa’s adventure compares the Lincoln County War between opposing ranchers and political parties to the L.A. gang and drug wars of our own time. Marcy warns Rosa that “C-Force,” who now occupies the White House, is creating a monstrous army by combining DNA from an alien found in the 1947 Roswell UFO with ChupaCabra, the mythical Mexican monster that appears in two of Anaya’s earlier books.

Rosa has a flash drive that contains the genomes of these beasts. Some of the cloned monsters called himits, including Saytir, the newest ChupaCabra, pursue Rosa into the past to get that flash drive.

“C-Force” has policies that remind us of the Trump administration, including separating Mexican children from their parents at the border and a hatred of Muslims. The book is a mash-up of magical realism, steampunk, political satire, and historical fiction.

It could be an engrossing and enjoyable read, but the book is so short that the different ideas never get room to blend and fit together. Instead, Anaya thrusts information at us in long passages of perfunctory exposition that never engage as more than forced backstory. Rosa often reminds herself that the women in the story have stories similar to her own, but we never see anyone or anything in detail. Anaya seldom describes settings or characters with any sensory imagery, and the minimalist style is weakened even more by gaps in the narration that contradict the book’s main premise.

Rosa has been transported 140 years into the past to learn the truth about Billy the Kid, who is her guide on the journey, but the book covers between two and three years, and Billy is apart from Rosa for months at a time. He returns and gives wooden summaries of what has happened, but they contradict Rosa’s goal of finding that truth by witnessing the events.

Billy even contradicts himself from page to page. In one scene, he tells Rosa that Pat Garrett is “a good man,” who rustles cattle and pays his debts (he and Billy have often gambled together). Later in the same scene, he says Garrett can’t be trusted and only wants the reward money for killing Billy the Kid.

Anaya mentions an historical Anaya who was associated with Henry McCarty, better known as “William Bonney,” an alias of the outlaw Billy the Kid, but it’s not clear if this is the author’s own ancestor or merely a coincidence. The book also fails to explain why Rosa is so driven to write a book about the outlaw that she spends three years in the distant past. Her consistent absence at major events in Billy’s life makes the premise harder to accept.

Throughout the book, when not summarizing events with wooden prose, Anaya often bombards us with a series of rhetorical questions. They’re interesting on a philosophical and scientific level, but have little to do with the story. Anaya never attempts to answer them, so they do little except create artificial suspense.

The most lyrical and powerful prose in the book is the last ten pages after Garrett has shot Billy and Rosa reflects on his funeral and the land he has left behind. If the entire book were written this way—and were much longer—Anaya efforts might have succeeded more completely.

Right now, the short work reads as a series of ideas in an early draft.