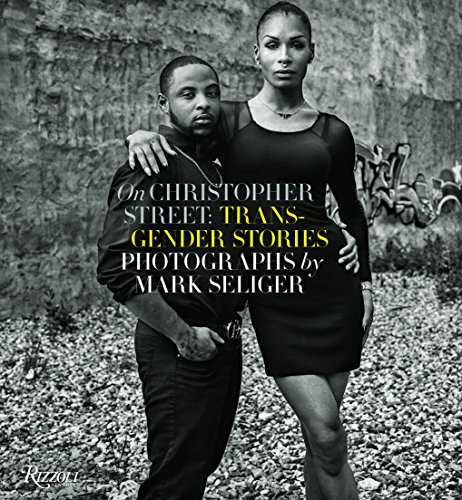 “Christopher Street by Mark Seliger is a magnificent volume of stunning photography and heartbreaking stories. It makes the struggles real and immediate.”

“These are our streets, and these are our people.” Janet Mock makes this proclamation in her foreword to On Christopher Street: Transgender Portraits by Mark Seliger. Seliger made his reputation photographing celebrities and rock stars working as the chief photographer for Rolling Stone. His work has appeared in Vanity Fair, GQ, Italian Vogue, and Time. Ms. Mock is the founder of #GirlsLikeUs, a social media project that empowers trans women, and hosts So POPular, a weekly MSNBC digital series about culture. Rizzoli, a high-quality publisher of art and photography books, published On Christopher Street in 2016. What Seliger, Mock, and Rizzoli together have achieved is a work that legitimizes the lives of transgender individuals. Mock states, “As visibility of LGBTQ people increased, city officials tried to suppress and control queer and trans people's expressions, identities, and sexualities.”

Besides thuggish law enforcement agencies and narrow-minded politicians, Christopher Street denizens face another economic hurdle: gentrification. Mock goes on to say how “the fight continues for LGBTQ people, particularly those from low-income and people-of-color communities.” Seliger's portraits capture these intersections of race, income, and sexuality.

For the project, Seliger decided to use “one camera, one type of film, and one light source.” What results are haunting elegant portraits of individuals and groups captured in black and white. In the acknowledgments, Seliger lays out the specifics: “All images were shot on my Hasselblad 500c/m with 80mm/f2.8 and 60mm/f3.5 lenses, using Kodak TRI-X 400 film.” The film stock renders the subject with lush precision while the background is blurred.

Several photographs include stories from the subject. Each give voice to a community demonized by mainstream (read: white, straight) and held at arm's length by the gay and feminist communities. As Seven King relates, “I never had a role model. It was always just me wanting to live my truth and be happy, and I live and look in the mirror and see what I always saw internally.” The personal struggles are harrowing and touching in their poignancy. The stories detail how these trans individuals merely want acceptance to be treated with dignity.

They found this on Christopher Street in New York City. Mock tells how “Christopher Street is a beacon for those who are questioning, seeking, and exploring self. . . . [T]here are all kinds of sexual orientations and gender identities, endless possibilities for potential selves: transgender, transsexual, non-binary, genderqueer, femme, butch, cross-dresser, drag kings, drag queens, and many other identities that shift, adapt and challenge our understanding of gender.”

While this may sound like a LGBTQ New Jerusalem, a veritable paradise on earth, it is not without its share of dangerous realities. Trans youth, abandoned or disowned by their families, face life on the streets. Mock says, “The street teaches you about living your truth, about accessing vital healthcare, about navigating shelter systems, about remaining safe in underground economies.” Many stories included here involve life on the mean streets. Yet there are stories about upward mobility and personal redemption.

Despite stories of success, disruptions can always occur. Victoria Beltran explains how “I did a movie called The Dictator . . . and I wasn't out. And the New York Post outed me as a transsexual actress, which devastated me. I felt very discriminated against.” The trans community also faces daily threats of violence and murder. Even with the progress made by the gay liberation movement, these everyday barbarities continue.

Disinformation, prejudice, and ignorance fuel these atrocities. This is due to people's misunderstanding of what it is to be trans. (Hollywood has continued to confuse the concepts of transvestism and transsexualism. They are not the same.) Several stories begin with how the subject felt they were born in the wrong body. It has nothing to do with sexuality. Separating and understanding how gender, sexual orientation, and the sex act are three different things.

In addition, some trans individuals opt for surgery, others don't. All these disparate issues can be seen as threats to the rather narrow, simplistic, and reductive idea of two genders. But what had been seen as a threat can also be seen as a reason for celebration. Gender is not a binary opposition. Gender is fluid with many gradations and shades of difference. Seliger celebrates these differences in the portraits of trans individuals on Christopher Street.

Christopher Street by Mark Seliger is a magnificent volume of stunning photography and heartbreaking stories. It makes the struggles real and immediate. Rizzoli has not only offered a quality product, it has done a public service, using its prestige within the world of fine art photography to legitimize trans Americans. The recent Supreme Court ruling (Bostock v. Clayton County, Georgia) found that employers couldn't fire an employee for being gay or trans. It represents a positive first step against trans discrimination. Christopher Street captures trans portraits of beauty and defiance, humanizing their everyday struggles and legitimizing their status as equal members of American society.